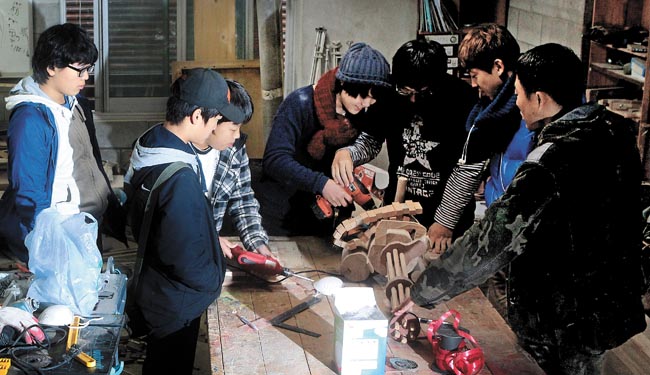 Students of the Wild Flower Adolescent Community Center participate in a woodcraft class. The Ministry of Gender Equality and Family selected the center as one of 14 groups of individuals and organizations who have been improving the lives of Korean teenagers. By Oh Jong-taek


The Wild Flower Adolescent Community Center, a combined school and welfare center for teenagers, was honored by the Korean government for its 17 years of providing education and shelter for struggling teenagers.

According to the Ministry of Gender Equality and Family, it selected 14 groups of individuals and organizations who have contributed to bettering the lives of Korean teenagers and awarded them on Friday.

The community center was opened in 1994 by pastor Kim Hyun-soo and his wife Cho Sun-sil after seeing a group of teenage schoolgirls sleeping curled inside a church when the elderly couple went there for early morning worship service in winter. The students told Kim that they ran away from home because of family problems. The elderly couple decided to open up a shelter that does not only provide a place to sleep but also education.

With received donations and local government agencies’ support, Kim and Cho opened up a total of 12 shelters and alternative schools in Ansan city, Gyeonggi, and Gwanak District in Seoul in the last 18 years and a total of about 300 students have come through the center as of this year. Kim said that four or five students live in each shelter with one volunteer teacher while several education programs, including floral arrangement, woodcraft and theater classes, were given to the students.

“I tried to provide education programs that students actually can enjoy and participate in because many of our students told me that they couldn’t enjoy the classes in their previous schools as they only aim to teach subjects for the College Scholastic Ability Test,” Kim said.

From the school, many juvenile students got their smiles back. A 16-year-old boy Kim Hyung-min, who suffered from computer game addiction, told the JoongAng Ilbo that he want to be a social worker after graduating from college.