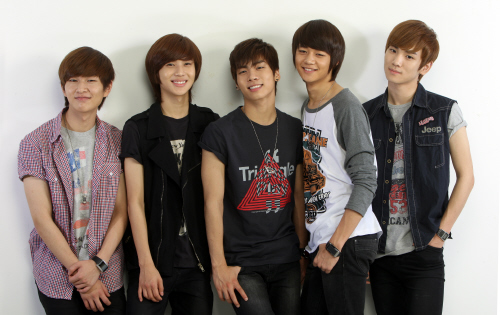 Three members of K-pop group SHINee have released a travel diary chronicling their travels in Europe.

Key, Onew and Taemin were present at a press conference on Dec. 13 at Times Square in Yeongdeungpo District, western Seoul, to promote the launch of their new book.

The book, titled “Children of the Sun,” is a book about the three members’ recent trip through Barcelona. “It reads like a diary and features our thoughts and learning from traveling,” Onew said.

“It is hoped that the book will be a relatable text to all youth and not just the fans of the group,” said a representative from the publisher, Woongjin Living House. “The book portrays SHINee in a never-before-seen light. The book asks the question, ‘What happens if boy band members have time off from their busy schedule to do what they would like in a foreign city?’ ”

The book is made up of three parts featuring an “Around” section listing tourist attractions, “Another,” where tourist info is given, and an “Inside” section that details SHINee members’ handpicked spots.

When asked why Barcelona was chosen, Key said, “At first we thought of cycling through Prague and plans were nearly finalized. Then we had a moment of epiphany and thought of Barcelona. The city is bustling with quirky charms, just like us.”

A travel author helped write the book so that the messages the group wanted to send would be clear and relatable, the members explained.