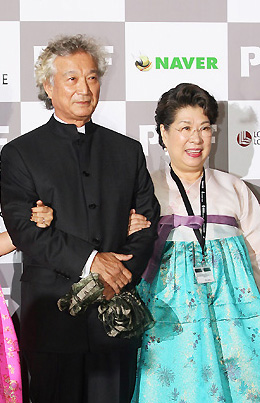 Actress Eum Aeng-ran spoke candidly in a television show aired Dec. 20 about the controversy that followed the release of her husband Shin Sung-il’s shocking autobiography on Dec. 5.

“I’ve always been a family-oriented person who wanted to keep the peace. However, for the first time in my 47 years of marriage, I am going through a real tumultuous time,” Eum said as she made her first official comments on the autobiography while appearing on “Bae Gi-wan, Choi Young-ah and Jo Hyung-gi’s Good Morning.”

In the autobiography titled “Youth is Barefoot Running,” veteran actor Shin opened up about his love affair with the late newsreader Kim Young-ae. The 74-year-old actor admitted that he was unfaithful to his wife during their marriage and that his former lover was even with his child at one point.

Despite living separately from Shin and not having visited her husband’s home for more than four years, Eum said she would not consider divorce.

“If we got divorced every time the tabloids mentioned that we were divorcing, then I would end up going through the divorce more than 50 times,” she explained. “Some live like this, some like that. I intend on staying with my husband until the day I die.”