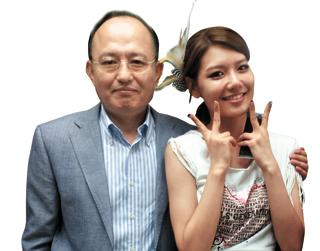 He may lose sight to an illness called retinitis pigmentosa, or RP, in which the visual field becomes narrower and eventually closes altogether. His daughter is a star performer. And while the father may be proud that the eyes of the world are on her, he may never be able to see her act again.

This is the story of Choi Jung-nam, the president of an association meant to help people in the process of going blind. He is also father of Girls’ Generation member Sooyoung. Choi worked in trade until 2004 when he realized he was having trouble seeing and he went to an ophthalmologist.

The doctor confirmed that Choi was suffering from RP and would eventually lose his sight. He was shocked by the diagnosis and anxious about his future. After doing research and making inquiries, he found a group called the Korean RP Association which consisted of people suffering from the same illness.

“At that time, even the ophthalmologist did not know much about RP,” Choi said. “I could hardly expect very good medical care.”

Choi has been a president of the association since 2006. Currently, it has 5,000 members and the number of Koreans who suffer from RP are estimated at 15,000.

Choi is surprisingly free of self-pity. “I had faith in God even after I was diagnosed with RP, which made my family worry less,” he said. Choi and his family are devout Christians. The family encouraged each other and went through the hard times by saying, “A miracle of making the blind see again is possible.”

In August 2007, youngest daughter Sooyoung made her debut with Girls’ Generation. “Outside, she is a glamorous star,” Choi said, “but in our family, she is a kid who is family oriented and has deep thoughts.” Even during her busiest times, she doesn’t forget to send messages to the family and keeps up with her father’s condition, Choi said

Other Girls’ Generation members, Tiffany, Yuri and Seo-hyun, were touched by Sooyoung’s story of Choi and often donate to his association.

Choi believes he can recover from the illness. “Treatments for RP and progressive retina disease are expected to have bright prospects,” Choi said. “Genetic treatment was successful for few people and a treatment using stem cells is undergoing clinical trials in the United States.”

In association with Seoul National University Hospital, Choi has established a progressive retina disease research society. The only problem is lack of funding.

Recently, Choi received good news: Soshified, a Girls’ Generation international fan club, is planning to hold charity concerts for K-pop fans next summer in Seattle and Los Angeles in the United States and Sydney and Melbourne in Australia. The proceeds will be all donated to the progressive retina disease research society.

It’s not the first time Soshified donated to those in need. After Japan’s terrible earthquake last March, they donated money.

“It’s both surprising and pretty wonderful that foreigners are coming to a small country, Korea, to help people who are visually impaired,” said Choi. “That’s the effect of Girls’ Generation.”