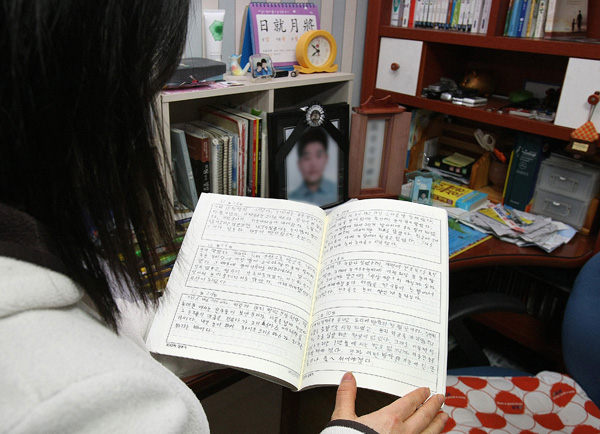 The mother of the bullied 13-year-old male student surnamed Kwon, who jumped from his apartment last week after leaving a suicide note recounting his abuse by classmates, reads a diary her son wrote last year on Christmas Eve at her home in Daegu. By Gong Jeong-sik


Two middle schoolers’ overzealousness for the online role-playing game MapleStory led to severe bullying of a classmate, who couldn’t take it any longer and committed suicide.

The 13-year-old bullying victim jumped off the balcony of his seventh-floor apartment in Daegu on Dec. 20, leaving behind an anguished, four-page suicide note detailing the abuse he suffered.

Police confirmed Saturday that most of the allegations in the suicide note were true.

Daegu Suseong Police Station said that the bullying of the victim, who was surnamed Kwon, began as early as last March. The two classmates wanted to get more online rewards in the MapleStory game, so they forced Kwon to play the game using their IDs.

“[They] forced me to play the computer game and that’s why I played every day and my grades dropped,” Kwon wrote in his note. “They took all my money so they could purchase items [for the game]. [The bullying] got more intense over time. They made me do their homework, tortured me with water, hit me, insulted my family and took my books so that I couldn’t study.”

Things got even worse when the two classmates’ MapleStory IDs were stolen and they lost all the items they had paid for or earned in the game. They blamed Kwon for the loss of the IDs and started physically punishing him.

“Today is December 19,” Kwon wrote on the day before he killed himself. “They twined a radio cord around my neck, dragged me around and told me to eat crumbs from the floor.”

Kwon’s mother, surnamed Yim, is a 46-year-old middle school teacher. She told the JoongAng Ilbo yesterday, “This case must not fizzle out because it was done by teens.” She said she hopes her son “is the last victim of bullying at school.”

However, she said she doesn’t want unduly harsh punishment for the two students just because her son was the victim, and didn’t want them to be publicly named and hounded on the Internet.

According to the police, the two classmates frequently used Kwon’s elder brother’s martial arts equipment to beat him at his home. Police also said that the classmates sent more than 300 text messages to Kwon’s cell phone threatening him. Their behavior was worse than that of gangsters, police said.

After questioning over the weekend, police said the classmates admitted most of the abuse mentioned in the suicide note, but accused each other of forcing Kwon’s head under water.

Police said yesterday they will give the suspects lie detector tests.