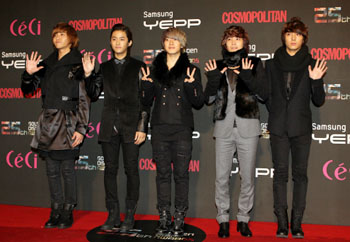 As a Christmas special, boy band FT Island took to the stage at Japan’s Yokohama Arena for the “FT Island X-mas Live 2011 - Winter’s Night” concert.
The event took place over two nights from Dec. 23 to Dec. 24 and attracted some 30,000 fans to the venue.

The tickets for the concert were sold out within a minute of going on sale, and the band performed 26 tracks at the event, including hits such as “Brand New Days” and “Distance,” which were top-performing songs on the Oricon charts.
As well as performing as a group, members Hong Gi, Jae Jin, Seung Hyun, Min Hwan and Jong Hoon took to the stage for solo acts.

In addition, the leader and vocalist Hong Gi expressed his desire for more live concert tours.

“If we tally up the number of songs we’ve released in Japan and Korea, we have some 130 songs. I’d love to be able to make a tour and perform all these songs,” he said.

Leading up to the Japanese Christmas showcase, Hong Gi attracted many viewers to his personal Twitter account by posting pictures of himself in rehearsal for the show.

The boy band is extremely popular in Japan after having made its debut in 2010.
In May, the band reached the No. 1 spot on Japan’s Oricon daily album chart with “Five Treasure Island.” The group will return to Korea in early 2012 to release a new album.