Beast: Coming to a city near you

Beast: Coming to a city near you 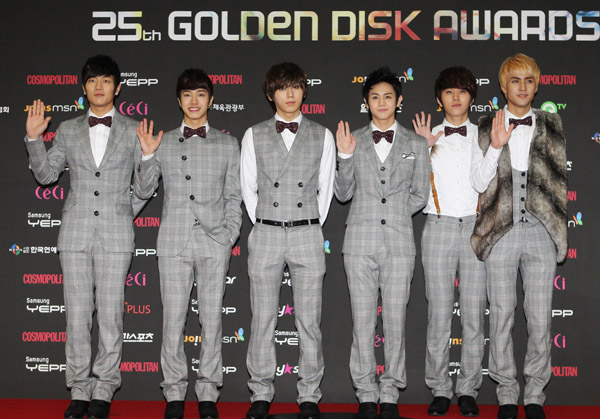 Popular boy band Beast will kick-start its global tour of 21 cities in 14 nations from Feb. 4, according to an announcement by the group’s agency Cube Entertainment at a Dec. 26 briefing session at the Lotte Hotel in Sogong-dong, central Seoul.

The tour is called “2012 Beast First World Tour -- Beautiful Show” and the planning will incorporate a lot of input from the band members to make it a memorable show for the fans. The first stop of the tour will be in Seoul and then the group will travel to Germany, England and Spain in Europe as well as the United States, Canada, Japan, Taiwan and various Asian countries. The agency said that an estimated 200,000 fans will attend the concerts throughout the world.

“We are investing around 20 billion won ($17 million) toward production of the event as we are incorporating some cutting-edge technology. There will be use of 3-D and other visual effects in the show. We are aiming for nothing less than the greatest visual arts spectacular,” said a representative from Cube Entertainment. The concert will also aim to introduce new songs by the group unlike previous concerts where past hits were the focus. The tour is expected to wrap up around April.

South America has been left out of the first world tour schedule due to delayed communications from agencies there. “We are still in talks and there is a chance that the tour schedule might change slightly to include stops in Argentina, Brazil and Chile. We’ll see how the planning goes.”

The members of the group said they are thrilled about their first world tour.
“We want to make this show worthwhile for the fans. It’s not about how many tickets we sell but about achieving perfectionism on stage. Through the world tour we want to make K-pop known to a greater audience,” said Yong Jun-hyung from the group.