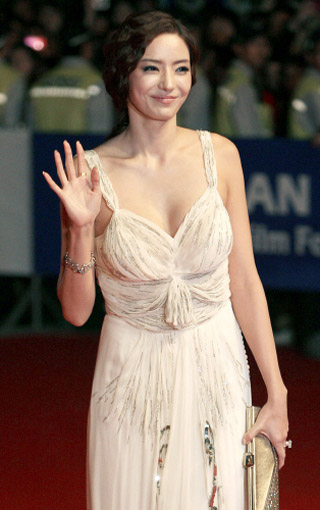 Korean actress Han Chae-young has received two awards in China in the last month. According to the star’s agency, the actress won the award for Best Foreign Actress at the 2011 Drama Awards hosted by Anhui Television and Chinese Internet portal site Sina.com. The entertainer rose to fame from dramas such as “Boys Over Flowers” and “A Man Called God.”

The Hallyu star also showed off her knowledge of the Chinese language on stage by presenting the actor Jimmy Lin with the “2011 Online All-around Entertainer Award.” Other presenters of the night also praised the actress for her “ability to pull off the symbolic color red” which is associated with good fortune in China. One presenter said that seeing Han on stage was, “Like watching a goddess.”

Earlier in the month on Dec. 13, Han also won the title of the most fashionable entertainer of the year at the China Trend Awards hosted by Beijing TV.
Han was awarded out of some 100 Chinese celebrities who attended the event.

The 32-year-old actress made her debut in 2000 in the movie “Record” and rose to stardom by playing the love interest of singer Kim Hyun-joong’s character on the teen drama “Boys Over Flowers” in 2009. The drama became a huge hit in Asia and launched the careers of the actors who featured in the series.