Lucid Fall, up close and personal

Lucid Fall, up close and personal 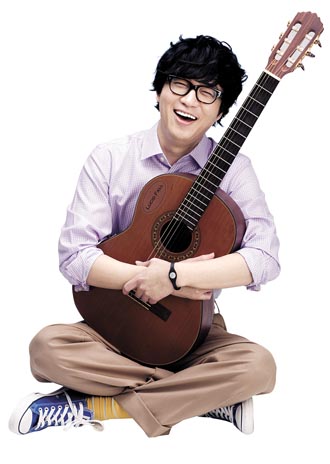 He chants poem-like lyrics to placid melodies. If you listen with your eyes closed, it feels as if he is right next to you, whispering in your ear.

Lucid Fall, a.k.a. Jo Yoon-suk, is back with his fifth album, entitled “Beautiful days.” The album comes two years after his previous one, “Les Miserables,” also released in the middle of winter.

The singer-songwriter said during an interview at his agency office in Sinsa-dong, southern Seoul, that he composed eight out of 11 tracks on the new album, during a month at home in the summer. “All that I did outside of my house was grocery shopping and walking my dog. I was so passionate during that period that I didn’t even realize the days passed by so fast.”

The 36-year-old musician debuted with an indie band “MiSeoni” in 1998 five years after he won third place in the prestigious Yoo Jae-ha Music Competition, which has served as a gateway to success for many talented songwriters in Korea.

In the title song, “Eobuga (A Fisherman’s Song),” he compares music to fish and he becomes a fisherman. “I have been making this fishing net the whole night. But it will miss smallish fish. But I am truly grateful that this small, narrow ship is full of so many fish eventually ... I am very grateful that I could sing tonight after finishing the day safe and sound,” the lyrics go.

“Whereas songs I made before were meant to speak to someone else or comparing my emotion to some objects, the speaker has become much closer to myself,” he said.

His musical style is diverse on the new album, with accompaniment coming from accordion, viola, cello, flute and many other instruments. A handful of musicians with unique personalities - from pianist Kim Gwang-min to singer-song writer Yoo Hee-yeol, guitarist Lee Sang-soon and saxophonist Sohn Sung-jae - also participated. He incorporated jazz with “And It Snows” for the first time in his career and “Fire” has a flamenco feel.

A graduate of Seoul National University’s chemical engineering department, he juggled studies and music, spending seven years at the University of Lausanne. After earning a doctorate in biotechnology there, he came back to Seoul in February 2009. He says he is “happier as a musician” than as an academic.

“Regrets? Not even one,” he said when asked if he has ever second guessed his decision to drop serious studies. “I did my best and I wrapped it up well. And I am so clearly aware that the road was not for me to take.”

His love of poems is well known. Preparing for the latest album, he enjoyed reading Misuzu Kaneko, a Japanese poet and singer-songwriter especially for children who lived from 1903 until 1930. “I have realized that poems with lower threshold for readers to understand are good ones. The poems were good not only for children but for me, an adult. I think the same is true with music. Easier yet good music is what I have been inspired to pursue after reading her poems.”

In recent years, serious K-pop musicians have been increasingly making inroads into talk and comedy shows on TV.

Lucid Fall says he has also received many offers. At the moment, however, he has no plans to accept them.

“What will make me best are stage performances and album recording,” he said.