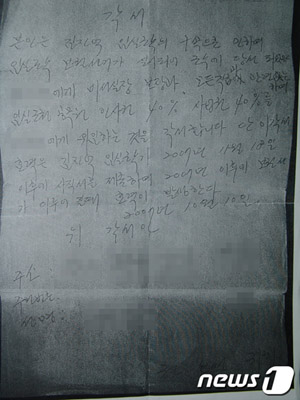 In Imsil County, where a record number of successive county officials have been charged with breaking the law, officials are now under fire after contracts with an “election broker,” an agent who promises votes in exchange for various kickbacks should the candidate be elected, surfaced.

The Imsil County chief, Kang Wan-mook, 52, stepped forward and admitted on Wednesday that he guaranteed, in a memorandum written in October 2007, a broker surnamed Kwon that if he were elected, he would give Kwon the right to decide who would be hired for a certain number of jobs with the county. Kwon would also influence decisions about which companies the county would do business with and act as Kang’s chief of staff.

Kang produced a memo showing the terms of a contract between Kwon and another candidate for county chief named Sim. Kang said his own contract with Kwon contained similar terms. The memo with Sim guaranteed Kwon “the right to appoint 40 percent of new county employees and preferential treatment on business contracts with the country,” along with a position as chief of staff in Sim’s office, should he be elected.

The memo between Kwon and Sim was broadcast on Jeonbuk CBS earlier this week. It was written in October 2007.

Election brokers have the ability to mobilize large numbers of voters in a community in support of candidates in exchange for various “favors.” Candidates who employ such brokers face the possibility of being uncovered and lambasted by opponents but at the same time they fear immediate defeat if they do not find a way to increase their votes. Seeking the help of election brokers is illegal in Korea.

Kwon, a building contractor, is a well-known elections broker and has had contracts similar to the one between him and Kang with numerous candidates over the years. In Kang and Sim’s case, he was backing two candidates running for the same office.

Kang stated Wednesday that Kwon contacted him initially and introduced him to two other brokers in 2007. Kwon also wrote up the contracts, Kang said.

“I was defeated in two Democratic Party nominations,” Kang said, “along with several other elections in the past, and was desperate.”

He said he hoped securing help from Kwon, who wielded a hefty influence over votes in the community, could be a determining factor.

Kang was charged for misappropriation of political funds during last year’s district elections and, at a trial on Dec. 8, was sentenced to six months imprisonment, a probationary period of two years and an 8.4 million won ($7,290) fine.

He has appealed and had been under the radar until his statements on Wednesday.