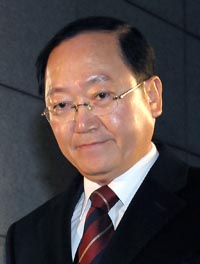 The prosecution’s investigation into the cyberattack that paralyzed the National Election Commission on the day of the October Seoul mayoral by-election reached a ruling party lawmaker when Grand National Party Representative Choi Ku-sik was questioned over the case.

Prosecutors said they asked Choi if he had known that his chauffeur, a 27-year-old man only identified as Gong, had asked his friend to launch the cyberattack on the National Election Commission Web site. The lawmaker was also questioned if he was the actual mastermind of the cyberattack.

During the initial investigation by the police, Gong said he had ordered the cyberattack to obstruct voters from locating their polling stations on the day of the election. Observers had forecast that a lower turnout would be beneficial to the GNP candidate, while a higher turnout would benefit the liberal independent rival Park Won-soon. Park won the by-election to become Seoul mayor.

Prosecution sources said the lawmaker denied any prior knowledge of the crime or any involvement. “I feel very sorry for the troubles that my aide caused,” Choi told reporters yesterday morning after the questioning. He denied his involvement. “I have nothing to do with it,” he said. “I told the prosecutors everything I know.”

Choi also said he would soon disclose what he would do with his GNP affiliation. The ruling party is pressuring him to leave the party.

On Wednesday evening, the prosecution also filed indictments against Gong and four other accomplices on charges of violating the laws governing communication networks and privacy. The indictments came with pretrial detentions.

According to prosecutors, Gong was accused of colluding with an aide to National Assembly Speaker Park Hee-tae and ordering the cyberattack. The prosecution is still investigating if Park’s aide, only identified as Kim, paid money for the cyberattack.

The prosecutors also said they discovered during the probe that Gong’s accomplices used methamphetamines. Their indictments included narcotics charges, the prosecution said.

The police concluded that Gong had acted alone planning the cyberattack. The prosecution rejected that conclusion and is investigating further.

A statement was issued by Seoul National University students Monday demanding the prosecution get to the bottom of the scandal, and Korea University students followed suit yesterday. The student association of Korea University held a press conference yesterday and said the investigation must be free of outside pressure. They also demanded an independent counsel to be appointed and that the Lee Myung-bak administration and the GNP apologize for the attack, which they called “an infringement upon the spirit of democracy.”