After a Beast of a year, one last award

After a Beast of a year, one last award 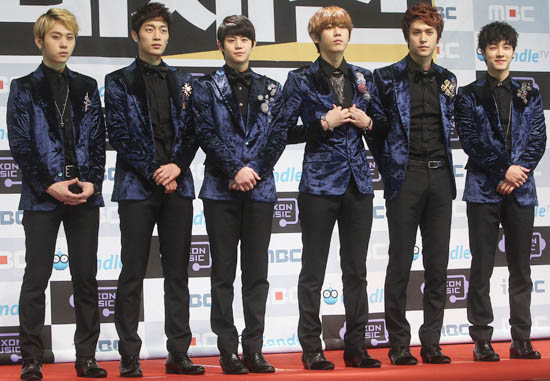 Beast celebrated the end of the year with a top honor at the KBS Music Festival on Friday, with its song “Fiction” winning the Song of the Year award.

At KBS Hall in Yeouido, western Seoul, Beast’s “Fiction” received 28 percent of the total vote from the viewers, beating out fellow boy band Infinite’s “Be Mine” by 9.1 percent. Singer IU’s “Good Day” came in third, followed by Girls’ Generation’s “The Boys.”

“We want to thank the parents of our six members and our fans,” said Beast’s Yang Yo-seob after the group received its award. “We will work harder in 2012.”

Its song “Fiction” was the title track for the group’s first studio album “Fiction and Fact,” which was released last May.

The group was also chosen as the best artist during the 2011 Melon Music Awards in November.

Beast’s agency Cube Entertainment said the group is planning for a concert tour that includes 14 countries around the world. The tour will begin from Seoul sometime this year.