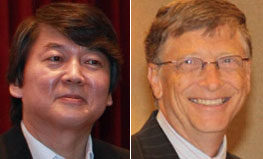 While many are eyeing his next step as a promising candidate for this year’s presidential election, political superstar Ahn Cheol-soo will leave for the United States Sunday to meet with Bill Gates, the co-founder of Microsoft.

According to his antivirus software company AhnLab, he will meet with Gates in Seattle on Wednesday to discuss how to run his foundation and share experiences with the American billionaire, who helps run the Bill & Melinda Gates Foundation.

Ahn announced in November 2011 that he will donate a large chunk of his fortune, half of his 37.1 percent stake in his software company, and build a foundation for underprivileged teenagers because it is his long-time dream.

But speculation escalated that the software mogul may kick off an active career in politics since he rose as a political force. After rumor spread that he might run for president and Ahn declared he would donate some of his assets, the stock price of AhnLab has skyrocketed to almost double, from 85,000 won ($73) on Oct. 25 to 155,000 won yesterday. The total value of stocks in AhnLab reached almost 300 billion won as of yesterday.

“Ahn negotiated tricky domestic regulations to build a foundation,” a close confidant of Ahn told the JoongAng Ilbo on the condition of anonymity. “I guess he wants to gain advice from Gates about how to run a foundation.” Gang In-cheol, Ahn’s advisor on legal affairs, also said, “Ahn will consider Gates’ advice” on launching the foundation.

Ahn will also meet with Eric Schmidt, Google’s executive chairman, on Monday, AhnLab said. The two plan to discuss changes in the IT industry at the headquarters of Google in San Francisco.

According to AhnLab, Ahn will convene a press conference at the end of this month to announce specifics on his foundation.

The Bill & Melinda Gates Foundation has invested $30 billion annually in the fight against AIDS and other diseases in developing countries and in expanding educational opportunities in the United States. Ahn also has publicly said that he “wants to give hope to underprivileged teenagers due to social and economic inequality.”