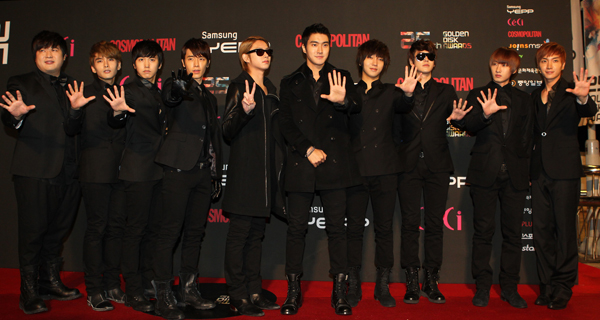 Some 500 K-pop stars, including more than 23 bands, will be leaving on planes bound for Osaka, Japan, to attend the 26th annual “Golden Disk Awards,” which are being held overseas for the first time in the history of the event.

The stars will depart the country over two days from Jan. 10 to Jan. 11.

Some of the celebrities expected to attend the event are Super Junior, Girls’ Generation, CN Blue, f(x), Beast and MBLAQ.

The two-day awards ceremony will begin on Jan. 11 and will consist of performances by various bands for three hours each day.

Ilgan Sports reported that the ceremony will be unlike any other because of the amount of planning that has gone into this year’s event. The stage stands 30 meters (98 feet) tall, and the width of the stage is around 81 meters, while a 21.7-meter screen has been placed at the back of the stage.

“The best people in sound and vision have been recruited for the show, and some of Japan’s best entertainers have been recruited,” said a representative from the award show. “The event will cross the border from an awards ceremony to a global K-pop festival, and the smallest details were emphasized in order to make it a memorable event.”

There has been speculation that fans of K-pop groups will flock to Gimpo and Incheon airports to see their favorite bands off on Jan. 10 to 11. It is thought that Japanese fans will do the same to greet bands and stars as they arrive at Osaka’s Kansai International Airport for the event.