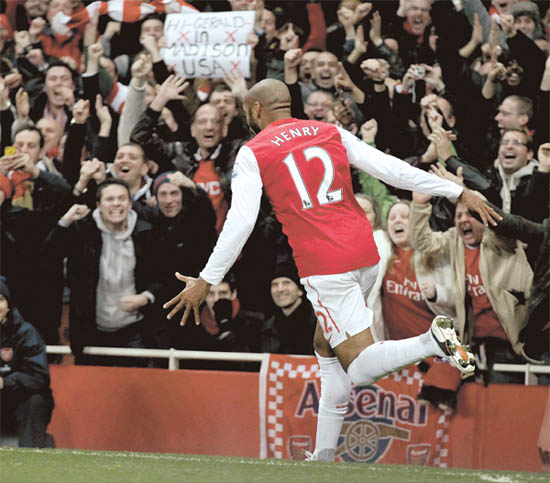 Arsenal’s former player and new loan signing Thierry Henry celebrates scoring on his first game back during the English FA Cup third round football match between Arsenal and Leeds United at the Emirates Stadium in London, Monday. Arsenal won 1-0. [AP/YONHAP]


LONDON - Lapping up the acclaim of the adoring Arsenal fans, it was as if Thierry Henry had never been away.

With one composed, trademark finish, the Frenchman, whose statue stands outside the ground, enhanced his legendary status with the 78th-minute winner in a 1-0 FA Cup victory over Leeds on Monday.

“It was like a dream,’’ Arsenal manager Arsene Wenger said. “It was a story you would tell young kids if you want to tell them a story about football. Sometimes it happens.’’

Back at the club on a two-month loan deal from New York Red Bulls, Henry was thrown on as a second-half substitute to salvage victory in a lifeless FA Cup third-round match.

The 34-year-old club great took 10 minutes to bring the crowd to its feet at the Emirates Stadium and take his club record goal tally to 227.

Rolling back the years, Henry cut in from the left to run onto a through-ball, killed the ball dead and curled an exquisite right-foot finish into the bottom corner.

“The feeling I had when I scored was amazing,’’ Henry said after his first game for Arsenal in more than four years. “I think I will always remember tonight.’’

After running around the perimeter of the pitch with his arms outstretched past delirious supporters, Henry hugged Wenger, his long-time mentor, near the dugout. His teammates soon smothered him and goalkeeper Wojciech Szczesny raced the length of the pitch to join the hoopla.

A grinning David Beckham, sitting in a corporate box high up in the stadium with his children, watched on as Henry slapped the Arsenal badge on his shirt.

It just needed Henry to slide on his knees, mimicking the bronze statue that is outside the ground immortalizing France’s record goal scorer, and it could have been 2004 all over again.

Some wondered whether Henry might damage his legacy at Arsenal by making a brief return to the club he scored a record 226 goals for in an electric eight-year spell between 1999-2007.

Age has stripped Henry of the pace and raw power that marked him out as one of the world’s greatest players but the desire and intelligence is still there.

“He was already a legend here and he has added a bit more to his story,’’ said Wenger, who will be praying for more of the same over the next six weeks before Henry returns to New York.

Having clinched his loan move on Friday, Henry was named on the bench to kick off his second coming but by the start of the second half, the crowd was fiercely chanting his name.

Warming up, and then stripping down to his kit, enlivened the supporters and he came on to roars in the 68th minute.

“He is a special player. He warmed up motivated, with an immense desire to do well,’’ Wenger said. “But he would still have felt some pressure. He is a proud player.’’

Henry had seen little of the ball by the time he seized on Alex Song’s through-ball and applied a deadly finish, repeating the shot he made his own in his first spell.

United States midfielder Stuart Holden, who plays for Bolton in the Premier League, tweeted “I knew it hahah! Henry take a bow, how many times have we seen that finish???’’

“When he got in this position, I thought, ‘That’s your angle,’ ” Wenger said. “He doesn’t force the shot and still made it look easy. That was the Thierry Henry finish.’’

The victory secured Arsenal a home match against Aston Villa in the fourth round.