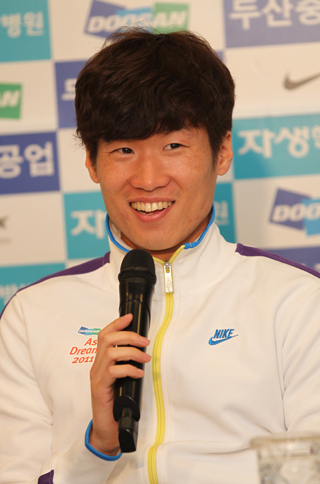 On Jan. 11 a local media Web site announced that, “Korean Soccer star Park Ji-sung is currently dating a Korean-Japanese beauty pageant contestant and entrepreneur.” The media also added that the two were intending to get married soon and the woman, whose alleged name is “Oh Ji-sun,” had studied sculpture at Seoul University as well as cooking in Japan; currently the owner of a traditional Japanese restaurant in Cheongdam-dong, southern Seoul.

In the original article that sparked intense public interest, the two allegedly met in 2001 at the wedding ceremony of fellow soccer player Ahn Jung-hwan to Lee Hye-won, who is also a former Miss Korea beauty pageant winner and entrepreneur, similar in specs to the woman Park is supposedly dating.

However, later on in the day, Ilgan Sports reported that Park’s father had refuted the allegations. “It is absolutely not true, as he never even attended Ahn’s wedding,” said the parent of the world-class soccer player.

The athlete’s agency also denied the rumors, explaining, “There are no wedding details to confirm.”

Previously Park’s name has been entangled in a slew of love and wedding rumors, mostly as a consequence of his high-profile celebrity status in Korea. The public has a keen fascination with the amorous life of the Manchester United striker as he is in physical prime and 31-years old, a suitable age to get hitched.