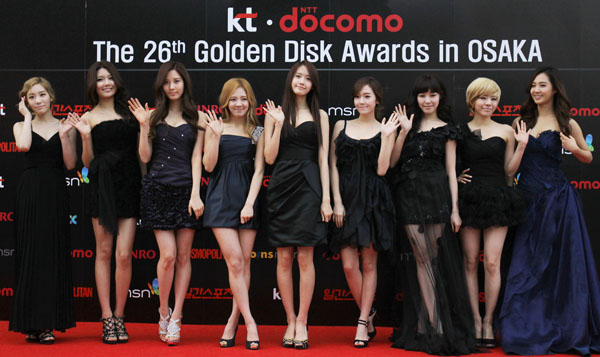 
With some 24,000 Japanese fans in attendance for the second and final night of the 26th annual K-pop music ceremony, Girls’ Generation won the night’s top award for their album “The Boys.” Like the previous night, the Jan. 12 event -- held at the Kyocera Dome in Osaka, the ceremony’s first time in an overseas location -- kicked off at 6:30 p.m. While the Jan. 11 installment was devoted to recognizing the number of hard-copy album sales by artists, the final night centered on awarding artists with the most electronically downloaded albums.

“We want to thank everyone who helped us along the way and we promise that this is just the beginning,” said a tearful Seohyun on behalf of all the members who were visibly emotional as they took the stage to claim their awards.
The group is the third to claim the award three times, following singers Kim Gun-mo (1994-1996) and Jo Sung-mo (1999-2000, 2003).

Recipients of the main prizes were Miss A for “Good Bye Baby,” 4Minute for “Mirror Mirror,” G.Na for “Black And White,” Sistar for “So cool,” Secret for “Star Light Moon Light,” K.Will for “Heart beat” and C.N Blue for “Intuition.”

Other K-pop stars awarded on the night included Huh Gak, Boyfriend, Beast, FT Island and Cho Shin Sung. The three-hour ceremony was hosted by Suzy of Miss A and Lee Hong-gi of FT Island.

One excited fan told the JoongAng Ilbo, “I’m so excited to be present to see so many K-pop stars in Japan at the one show.”
Some 500 Hallyu stars were present to perform at the event.

The annual ceremony, which began in 1986, is different from other award shows in that the focus is on the bands’ popularity rather than their achievements. The program, hosted by JTBC, will air on television over the Chinese New Year weekend.