Nichkhun of 2PM to star in new three-part Thai movie

Nichkhun of 2PM to star in new three-part Thai movie 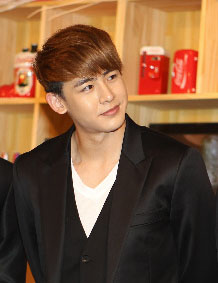 Nichkhun of 2PM, who is hugely popular in Southeast Asia, has been cast in a supporting role in a Thai movie, his agency announced yesterday.

Nichkhun will appear in one of the new movie’s three parts, according to the agency.

“I’ve always wanted to act, so I am so driven to perform as best I can. I am ready to give it all that I’ve got,” the boy band member said. He will be in Thailand until the end of January working on the movie.

Nichkhun is immensely popular in Thailand as he is of Thai and Chinese descent, though he was born in the U.S. Recently, a wax replica of the star went on display at Madame Tussauds in Bangkok. And 2PM made a donation of 130 million won ($113,490) in October to support Thai flood victims, boosting his popularity there.