A proactive approach to battle bullies

A proactive approach to battle bullies 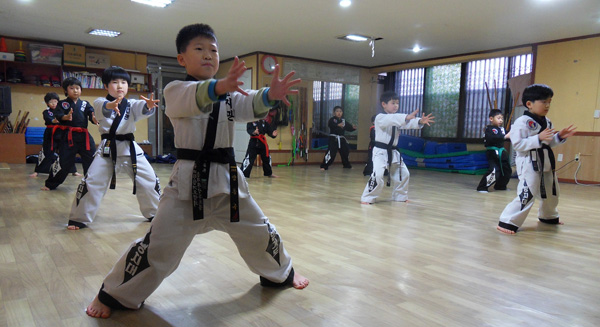 Hapkido students undergo training at the hapkido studio in Wolgye-dong, northern Seoul. Provided by the studio

On command, 40 small legs kicked straight in the air at the hapkido studio in Wolgye-dong, northern Seoul.

Among the trainees in black uniforms, Yang Seo-ho, 13, was training hard.

Yang, who is smaller than his classmates, was bullied when he started fifth grade last year. One day, after a hard hit from a violent bully, Yang was firmly determined not to be bullied any more.

So he started to learn hapkido and has since trained hard every day. After several months passed, the bully tried to hit Yang again, but Yang knocked over the bully using his hapkido skills. After that, the bully never bothered him again.

“I have more friends and I feel happier to go to school now,” Yang said.

Many students who were bullied like Yang or worried about being bullied started to learn taekwondo, hapkido and boxing.

Parents’ interest in teaching their children self-defense is rising with the increase in concern regarding bullying and school violence.

Though the number of students signed up for classes usually decreases during winter vacation, calls inquiring about such programs and lessons in self-defense and new registrants have noticeably increased compared with last winter.

According to a taekwondo gym in Yangjae-dong, southern Seoul, they get as many as ten calls per week compared with an average of one or two calls last winter.

Also, the number of students doubled at a boxing gym in Geoyeo-dong, southern Seoul, and a taekwondo gym in Daeheung-dong, northern Seoul, got ten registrants in one go right after bullying became an issue at the beginning of this month.

Most parents who call the gyms or consult with gym instructors are worried about school violence and want to teach their children self-defense.

An Hye-jung, 31, a mother of two girls who are in elementary school and currently attend a hapkido gym, said, “parents around me talk about school violence a lot after bullying became an issue and consider sending their children to gyms to prevent them from being targets of bullying. I will keep sending my children to the gym.”

A senior researcher of The Korea Taekwondo Association, Lee Jong-cheon, who oversees 12,800 taekwondo gyms, also said that parents who send their children to taekwondo gyms want them to be able to defend themselves against bullies.

Due to this demand, a gym in Changcheon-dong, northern Seoul has started a new self-defense class that is divided into lower and upper grades, which can be used easily in practice.

Along with self-defense, parents also expect their children to build their character by attending a gym. Um Jae-young, a taekwondo master in Haengsin-dong, Goyang, Gyeonggi, said that we do not teach character building separately because it is already included in learning martial arts.

“Children can learn consideration for those who are weak through competition in the gym,” Um said.

“When the same weight children compete, different levels can be matched such as a competition between a black belt and a white belt. A black belt learns not to compete with all his strength, but tries to match the competitor’s level not to hurt the opponent.”

Children who exercise tend to defend themselves from bullies and also defend their friends as well.

Out of 40 children in the hapkido gym almost everybody raised their hands when asked if they have ever witnessed school violence, and more than half of them stopped the bully.