Teenage bullying has gone beyond school walls. Seoul police said that it is investigating six middle school students who are suspected of assaulting two middle school girls on the streets of Seoul.

According to Namdaemun Police Precinct, a 15-year-old middle school girl who is only identified as “A” and her friend, both from Seoul, were beaten by six 16-year-old middle school students - three boys and three girls - from Incheon, at multiple locations, including a construction site and a fast food restaurant in central Seoul. The police said that the victims were assaulted over the course of five hours on Saturday. 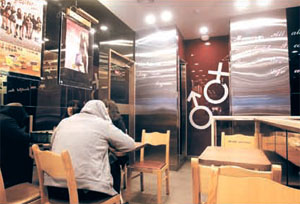 Around 9:40 p.m. that night, the victims headed to Myeongdong Theater in Jung District, central Seoul, to meet their online chatting friend identified as “B” by the police. When the two students arrived at the meeting place, they felt something was wrong because the group looked angry. The six immediately surrounded the girls and abruptly took them to a nearby construction site 10 minutes away from the theater.

One of the boys grabbed an iron pipe on the ground and began hitting their arms and thighs until they fell on the ground. The victims wailed and asked them to stop, but the other five assailants joined in, kicking and punching the girls.

The assailants later told the police that they assaulted the victims because the two had made fun of “B” and insulted her while they were chatting online. The victims later testified that they met her chatting and have known her for a while.

They were then taken to a 24-hour fast food restaurant near Myeong-dong and pushed into a restroom. The assailants locked the door, took off the victims’ clothes, and started beating them again and sexually assaulted them with umbrellas, the police said. While four of the six attacked the victims inside the restroom, the other two were on lookout.

“We had no idea that students were being assaulted on the second floor,” a staff person who works on the first floor of the fast-food restaurant told the JoongAng Ilbo. “I remember that there were a few customers on the second floor but no one knew what was going on.”

The police said that the assailants let the victims go after 3:00 a.m. and they immediately called their families for help. “My daughter had to receive treatment from an obstetrician,” the father of one victim thundered. “I can’t believe that teenage students could assault someone like this. There are so many bruises and scars all over my daughter’s body.” The police said it will interrogate the six assailants in order to take necessary legal action.