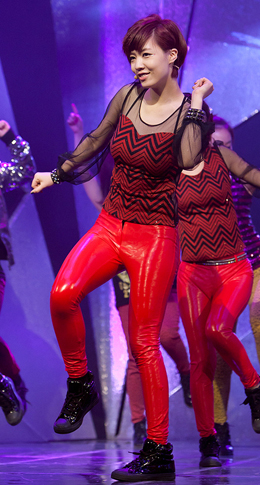 Ryu Hwa Young, one of the seven members of K-pop sensation T-ara, is said to be devastated and in a state of shock following the accidental exposure of her breast during the band’s performance of “Lovey Dovey” on the SBS show Inkigayo.

“As Hwa Young is still a teenager and a tender-hearted girl, she is so embarrassed about the whole ordeal. She is suffering from shock and despite the band’s triumph of coming in at No. 1 with the new song on three different music shows, the band members are focusing their efforts on making Hwa Young feel better,” said a representative from the band’s agency.

Fans were outraged and have made various complaints to the channel for airing the program. SBS has not made any comment regarding the incident.

Eun Jung, another member of the band, has also been involved in an incident. She injured her left knee on Jan. 24 when she slipped and fell on a snowy road. The recovery period is around six weeks and so recording of the reality program “We Got Married,” which the singer stars in, has been cancelled.