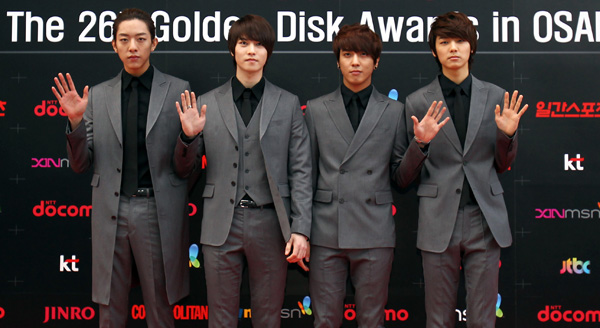 
CN Blue has become the first Korean band to appear on MTV Japan’s acoustic live-performance program “Unplugged.” The band’s agency, FNC Music, announced on Wednesday that CN Blue recorded the episode in front of a live audience in Tokyo on Tuesday.

The band sang a total of 12 songs including “Where You Are,” which was released in Japan on Tuesday, as well as previous hits “Let’s Go Crazy,” “Try Again, Smile Again” and “Kimio.”

The MTV program is taped in front of a small crowd and prohibits the use of synthesizers in favor of acoustic instruments. CN Blue’s performance was attended by just 150 audience members despite some 15,000 fans having applied for tickets.

“We were surprised at how many people wanted to attend the event. We gave it our best to make it the best performance for the fans,” the band said after the taping. The program will air in Japan on Feb. 25.

CN Blue made its debut in Japan last year with an album release.