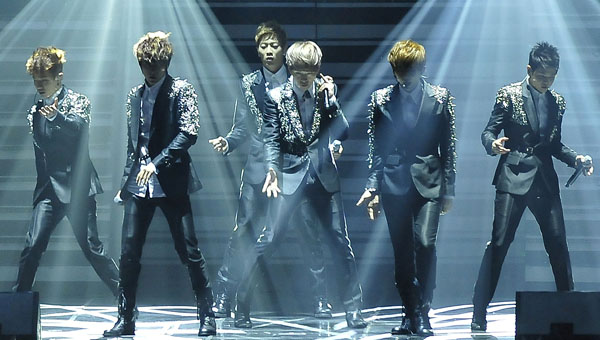 Beast officially kicked off its world tour over the weekend with some 24,000 fans attending the two-day concert in Seoul.

The boy band comprised of six members is set to tour 21 cities in 14 countries.

The first concerts of “2012 Beast 1st World Tour - Beautiful Show” were held at Olympic Park in southern Seoul on Saturday and yesterday.

A total of 27 songs were performed during the two-and-a-half-hour concerts, including hits “Soom,” “Shock” and “Fiction.” Beast’s next stop is Columbia Hall in Berlin on Feb. 12 followed by a show in Shanghai on Feb. 25.

“Beast is wanted not only in Asia, but also in other parts of the world where K-pop is growing,” said Cube Entertainment, Beast’s agency.

“Beast will test its potential through this year’s world tour and try to prove the power of K-pop on stage,” the agency added.