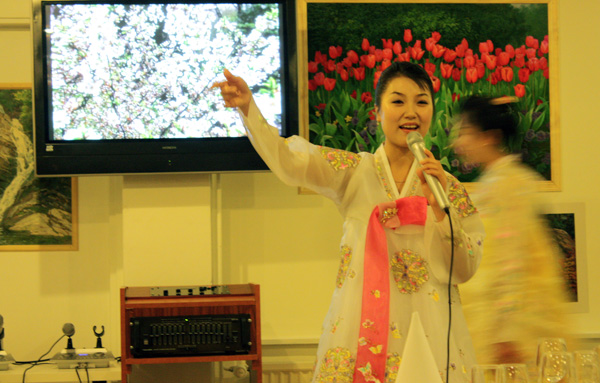 A North Korean restaurant has opened in the Dutch capital of Amsterdam in what could be the communist nation’s latest attempt to earn hard currency and foster closer ties with Europe.

The Pyongyang Restaurant was launched late last month under a joint venture between North Korea and two Dutch businessmen.

While North Korea is known to operate dozens of restaurants across Asia, it is the first time a North Korean restaurant has opened in Europe with the exception of a canteen that briefly operated near the North Korean Embassy in Vienna in the mid-1990s, according to a local source, who spoke on the condition of anonymity.

The restaurant is staffed by nine North Koreans, including the director and manager, Han Myong-hee, who worked for 15 years at a North Korean restaurant in Beijing operated by the North’s ruling Workers’ Party.

Pyongyang Restaurant, which seats 24 people, has its walls covered with pictures of Pyongyang and North Korean nature scenes.

Its menu offers a single nine-course dinner priced at 79 euros ($104).

Han said there are plans to offer more affordable dishes such as Korean noodles and dumplings after the restaurant’s official opening on Feb. 17.

“After our official launch, we plan to gradually serve a variety of dishes and operate during lunch hours as well,” she said.

The opening ceremony is expected to be attended by the North Korean ambassador to Switzerland, other North Koreans, and Europeans, Han said.

Analysts said the restaurant is likely to serve not only as a source of much-needed cash but also as a bridge to Europe for the isolated North.