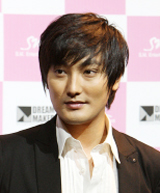 Singer Kangta attended a press conference on Tuesday for the reality singing-survival show “Voice Korea,” in which he will be a mentor.

The singer’s return to Korean television after moving to China is significant as he has neither appeared on a TV program nor released an album in his home country for more than four years. At the press conference, the singer expressed his initial hesitation in taking part in the program and resuming his career as an entertainer in Korea.

“The Korean music market is very much focused on the visual. It’s not somewhere you can make it big by just being a great singer. It’s competitive, and since I’ve been in China for so long, I was scared to make a comeback. Through this program I hope to ease back into the industry,” Kangta said.

The 32-year-old former member of the legendary idol group H.O.T will join renowned singers Shin Seung-hun, Baek Ji-young and Gil from hip-hop duo Leessang as mentors for contestants on the blind-audition singing show set to air on Feb. 10.