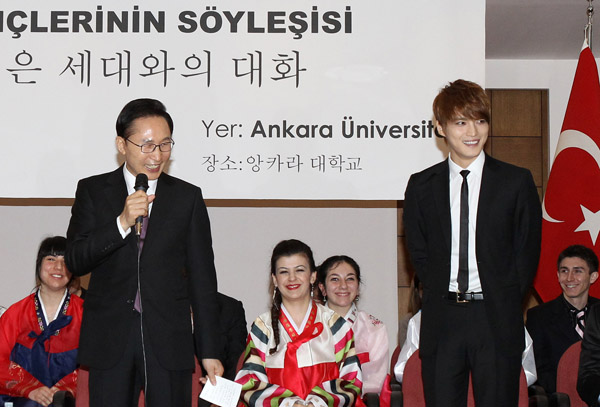 Singer Kim Jae-joong was treated to a banquet at the presidential palace in Turkey on Monday alongside President Lee Myung-bak and his entourage.

Kim was treated as a national guest of Turkey and met with politicians from both Korea and Turkey, including the presidents of both nations.

“I was really nervous as it sounded like a formal event, and as soon as I entered, President Abdullah Gul greeted me.

“President Lee also came over and welcomed me to the banquet. Everyone was hospitable, and they all called me ‘JJ,’?” Kim said.

The K-pop star took the time not only to converse with fellow attendees of the banquet, but also took pictures with the Turkish participants, acting as a cultural envoy.

He said that he was pleasantly surprised when a Turkish national sang the Korean folk song “Arirang” and “I Only Know Love,” a song from the 1970s by Shim Soo-bong, in Korean.