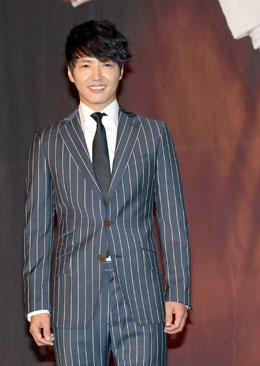 Two versions of the single are available for purchase. Version A contains the title track and a song from the MBC drama “Can’t Live With Losing”, which Yoon himself starred in.

In the alternate version, the title track is accompanied by a new song, “Two Glasses.”

Following the release of the single, Yoon is set to make a tour of Japan.
On Feb.25 the actor-turned-singer will visit Osaka, while on March 2 and March 10, he will visit Nagoya and Tokyo respectively.

“Yoon was set to leave for Japan on Feb. 15, however due to some circumstances arising, he will make his departure on Feb. 17,” said a representative from the star’s agency. Yoon is expected to remain in Japan until early March.

Yoon made his debut in the SBS drama “How to Marry a Millionaire” in 2005. His popularity soared after Yoon played the loveable playboy Oscar in the hit drama “Secret Garden” (2010).