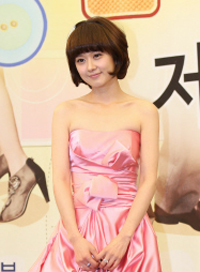 Singer Jang Nara returns to the spotlight in March with the new digital single "I Can Only Think of You."
The single will also contain the duet "It Was You," recorded with fellow singer and actor Alex.
"The song and music video are currently being edited and as soon as that's done the single will be released sometime in March," a representative from Jang's agency said.
The 30-year old singer-turned-actress shot the video for the single at a ranch in Daegwallyeong, Gangwon. She handpicked the male lead, who is played by baseball player turned musical theater actor Yoon Hyun-min.
Jang's new album is her first in more than three years. Her agency also said that this year, Jang will be more active in Korea rather than in China, where she has spent a significant amount of time as a singer and actress until now.
Jang made her debut in Korea in 2001. Two years later, she debuted in China, where she was well-received and rose to fame. This year Jang will also star in her first Chinese movie, "Flying with You."