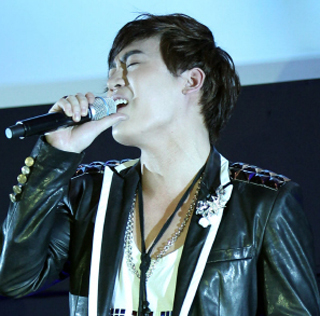 Singer John Park released a 30-second music video teaser for the new song "Falling," which is part of a five-song EP of the same name to be released Wednesday.
In the teaser video, Park's acting abilities were on full display, along with his emotionally charged voice.
The song was composed by Andy Platts from British soul-funk band Mamas Gun. Park wrote the lyrics and had a go at producing the song.
Park will perform the song for the first time on Thursday on "M! Countdown."
The EP, Park's first, was first promoted on Feb. 2 through the same program and fans have eagerly held their breath for its release since then.
Park was a semifinalist in the ninth season of "American Idol" in the United States and the runner-up in season two of the Korean singing contest "Superstar K," losing to nationwide sensation Hur Gak.
Previously, the Korean-American singer contributed to the soundtrack of the movie "Glove" and released a single titled "I'm Your Man."