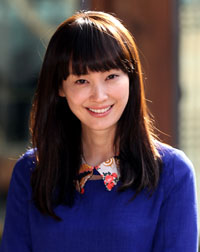 News viewers were in for a surprise on Feb. 20 when actress Lee Na-young appeared as a guest on the KBS current affairs program “New Line.”

On the show, the 33-year-old actress talked about her new movie “Howling,” which was released on Feb. 16, as well as her marriage and how it feels to grow older.

“I like the role of a female detective leading the case,” Lee said about what attracted her to act in the movie alongside Song Kang-ho in “Howling.”

The actress also said that Song helped her analyze the plot and get into character. “He’s an absolute genius,” gushed Lee.

When asked about the difference between playing a serious role as she did in “Howling” and being a model in a TV commercial, Lee said she strived to be her best in both settings.

“I want to look great in both commercials and movies, but obviously the difference is that in a movie I need to focus on my acting to appear beautiful. A commercial is a 15-second piece that strives for high impact, so it may be that I look better in a commercial than in a movie,” Lee said.

The show’s hosts also asked her about her age – often a touchy subject – but Lee wasn’t fazed, asserting that she wasn’t threatened by the prospect of turning 34. She treated questions about marriage in a similar fashion, saying that tying the knot is something she looks forward to, but that it’s not high on her agenda right now.