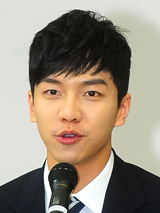 Lee Seung-gi has announced his departure from the SBS headline show “Mighty Heart,” which he has hosted since 2009. Recently, Lee also quit his role on the KBS variety show “1 Night, 2 Days.”

The singer-turned-actor will focus on his new drama “King 2 Hearts” on MBC, which is set to air from March 14.

In “King 2 Hearts,” Lee plays a prince who gets involved with a Special Forces instructor from North Korea when they are locked into an arranged marriage.

“Lee has expressed his desire to focus on his singing and acting career away from hosting. We have yet to find a replacement for Lee,” said a spokesperson for SBS.

Lee has been hosting “Mighty Heart” alone since last October, when co-host Kang Ho-dong went into retirement following a tax-evasion scandal in September.

Some industry insiders have speculated that Kang will return to the show to replace Lee, though Kang’s agency has denied the rumors.