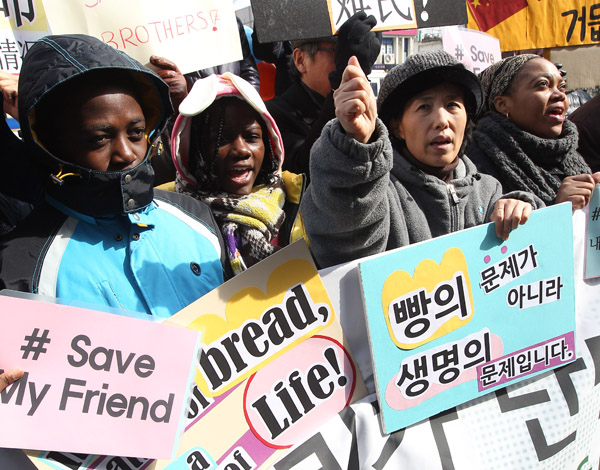 Foreign refugees in Korea hold a rally in front of the Chinese Embassy in central Seoul yesterday with Representative Park Sun-young of the Liberty Forward Party, third from the left, to urge Beijing to release a group of North Korean defectors in its custody. Concerns have risen that the defectors will face public execution if repatriated to their communist homeland. [YONHAP]

A South Korean lawmaker yesterday renewed her appeal for the release of a group of North Korean defectors facing repatriation, claiming that North Korea has recently made a request to China to hand them over quickly with a false promise of leniency.

Representative Park Sun-young of the Liberty Forward Party has staged a hunger protest for seven days in front of the Chinese Embassy in Seoul. She demanded the South Korean government take more aggressive action to stop Beijing from sending back the defectors to their communist homeland, stressing they will face execution after repatriation.

A group of foreign refugees in Korea, including those from the Democratic Republic of Congo and Myanmar, also held a rally in front of the Chinese Embassy alongside Park to pressure Beijing.

The U.S. also recently expressed its concerns about the possible repatriation and urged China not to send them to the North, a diplomatic source told the JoongAng Ilbo on Friday. Seoul is also planning to raise the issue at the United Nations Commission on Human Rights today in Geneva.

Testimonies of North Korean defectors who had been previously caught by Chinese policemen and detained in a prison in Tumen, a China-North border city, showed the brutal reality that the defectors face.

Choe Ju-hyeok, a 25-year-old defector currently in the South, told the JoongAng Ilbo that he was in the Tumen prison for three months in 2002.

Choe said he was detained in the prison with 17 other defectors who also attempted to defect to the South but were arrested by Chinese security guards. He recalled that defectors in the prison cried every night and trembled for fear of execution.

“North Korea’s open execution is carried out by firing about eight shots starting from the head,” Choe said. “But we still risk our lives because it’s better than living in the North.”

Ryu Seon-ja, a 47-year-old defector who successfully arrived in the South in 2005 after three failed attempts, said she was also detained in the Tumen prison.

“They normally wait to have 100 defectors in the prison before sending them to the North,” she said. “We must stop them from being sent back to the North.”