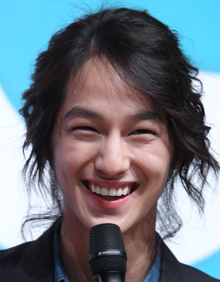 Kim Bum’s arthritis is showing no signs of slowing the star down, as he held a successful meet-and-greet in Japan on Feb. 25 for more than 1,000 fans.

At the fan meet in Ginza, Tokyo, Kim talked about his work and played games with those present. The 22-year-old actor also sang a preview song for the fans ahead of his Japanese music debut, which will take place this year. Fans were ecstatic, with some shedding tears when the star appeared on stage.

“So many fans applied for tickets, but due to the hall’s maximum capacity being capped at 1,000, we had to turn away many fans. We are currently flooded with requests asking Kim to come back to Japan,” said a representative from the star’s agency.

Kim thanked his fans through his agency, explaining that he appreciated the support they gave even though he hasn’t been active in Japan. The young actor promised that he would return to the nation in the near future.

Meanwhile, Kim has wrapped up filming the JTBC drama “Padam Padam” and is currently contemplating his next move. He remains active despite having been diagnosed with a mild case of degenerative arthritis from working out and dieting too much for his role on the drama.