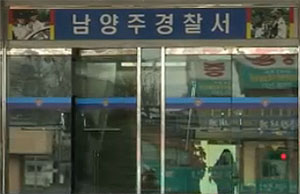 Police said they have caught a man suspected of killing three of his family members on Tuesday.

Guri Police Precinct said that they found the 47-year-old suspect surnamed Lim around 12:30 p.m. yesterday, bleeding profusely at a motel room in Sutaek-dong in Gyeonggi.

The police believed Lim had tried to kill himself. He was then immediately sent to a nearby hospital where he should recover.

“I called the police because the guy never came out, though the checkout time had passed,” a worker at the motel told the police.

At 4:18 p.m. on Tuesday, Namyangju Precinct Police found an elderly man surnamed Lim, 75, and his wife surnamed Kim, 74, with their 15-year-old grandson, all stabbed to death in their apartment in Jinjeop County in Namyangju, Gyeonggi.

The police said it received a call from the suspect’s 50-year-old brother. He urged the police to check Lim’s apartment because the brother had hinted at trouble between sobs when they talked earlier on the phone, “I’m so sorry brother, please check our apartment,” he had said, and then hung up the phone.

The police immediately dispatched officers to the apartment and found the elderly couple on the floor of their room. They found the boy on his bed in his bedroom.

The corpses were arranged to look like they were sleeping, their faces looking at the ceiling and their bodies covered with blankets. Police also found a knife that was presumed to be the murder weapon in the living room. They said they were trying to figure out where the suspect had committed the actual killing.

“We will interrogate Lim as soon as he gets better,” a spokesman of the Namyangju police said.

The police said that the 47-year-old suspect lost his job a year ago and has been living with his parents and son since then. Lim’s wife left the family in October 2009.