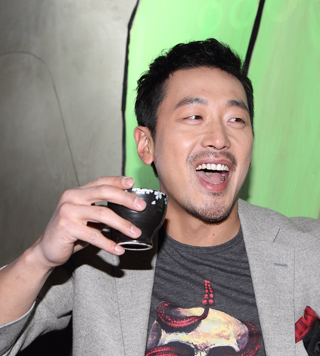 Actor Ha Jeong-woo is set to appear in a special episode of SBS’s celebrity news show “Night of TV Entertainment,” which will air today.

On the show, the 33-year-old will open up about his relationship with model girlfriend Ku Eun-ae. He will also take viewers to one of his hangouts.

SBS had said in a press release early yesterday that Ha would also reveal plans of marriage with his girlfriend. But after numerous news reports about Ha’s supposed plans came out, the broadcaster released another statement, saying, “Ha didn’t reveal specific plans of marriage with Ku - only his feeling about marriage in general.” It added that even that part was edited out of the show in the end.

Ha and Ku have been dating for more than three years, though last November there were rumors, later denied, that the two had broken up. The two started their romantic relationship in August 2008, and went public in April 2009.

Ha made his debut in 1998 in a commercial for Baskin Robbins and has since gained recognition for his role in the 2008 hit film “The Chaser,” among others.