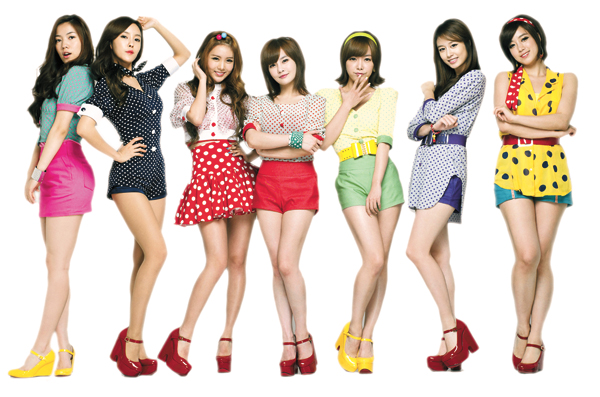 T-ara has produced a string of hits, including “Bo Peep Bo Peep,” “Roly Poly” and “Lovey Dovey.” All three songs repeat the same phrases over and over. The members of T-ara are, from left: Hwa Young, Hyo Min, Qri, Bo Ram, So Yeon, Ji Yeon and Eun Jung.[JoongAng Ilbo]


Korean pop songs from the old days portrayed various emotions from sorrow and anger to pleasure and joy and the accompanying moments of our lives. The same was true of pop music in the 90s. The song “To Mother,” released in 1999 by the now-defunct boy band g.o.d., talks about a mother’s love and “Musical” sung by Im Sang A and released in 1996, tells listeners that they are all heroes.

But it’s hard to find such empowering and insightful lyrics in the Korean pop of today, which is rife with repetitive hooks, gibberish, irrelevant English words and slang.

T-ara’s recent hit “Bo Peep Bo Peep” is a perfect example of the kind of repetition found in many of today’s biggest K-pop hits. In the four-minute song, the phrase “Bo Peep Bo Peep” is repeated about 110 times. When the song gets to the end, the lyrics are a mix of “oh” “ah” and “Bo Peep.” The girl group’s other hit “Lovey Dovey” is less repetitive, but the singers still sing the words “lovey dovey” about 18 times in all.

The boy band SHINee’s “Ring Ding Dong” isn’t that different from other songs with repetitive hooks. But the five-member boy group repeats the phrase “ring ding dong” so many times that it’s hard to count.

There are many examples of this infatuation with repetition throughout K-pop. Secret’s “Madonna,” Sistar’s “So Cool” and f(X)’s “Hot Summer” are just a few. In the f(X) song, we hear the word “hot” around 80 times, ensuring that the listener’s temperature will rise no matter what the season.

“It’s not uncommon for lyrics to become engraved in the listeners’ mind,” K-pop critic Song Gi-cheol said. “But K-pop puts more emphasis on melody than lyrics.”

In another trend, irrelevant words borrowed from English are often inserted into pop songs. 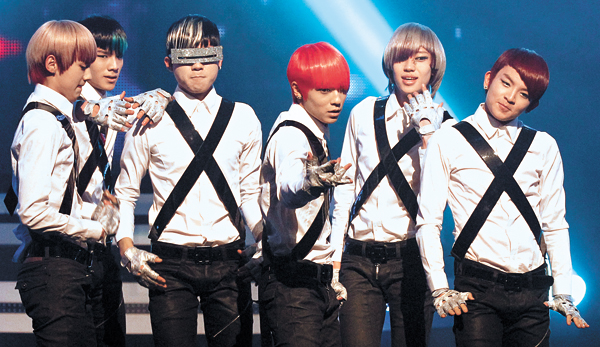 The lyrics to Block B’s “Go Crazy” are as follows, with the words in quotation marks spoken by the singers in English: Everybody follow me “like” a pesticide truck / I belong to everyone “do not” anyone’s possession.

GD & TOP’s “Knock Out” was banned from three national networks when it was released late 2010 because of its Korean title “Ppeogi-gayo,” which is a vulgar expression.

Others have criticized K-pop songs for their shallow depictions of love. 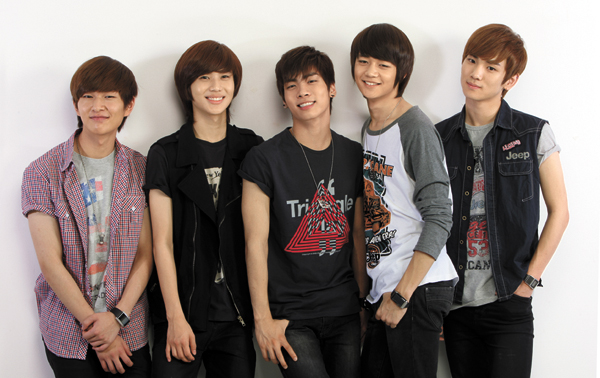 “The lyrics came first back in the old days, but it’s very different these days,” said a composer who asked to remain anonymous. “Now the melody comes first and the lyrics are added later. For this reason, it’s hard to write elaborate lyrics.”

The composer added that the changing environment of the nation’s fast-paced music industry also plays a decisive role in producing flimsy lyrics. Even if a song becomes a hit, it will only stay on the top of the charts for a week or two, which means that producers want catchy lyrics in order to make an impression on music fans.

“Pop music implies a mass appeal, but if the lyrics can’t capture a broad audience it could damage the current boom of K-pop overseas,” said K-pop music critic Im Jin-mo.