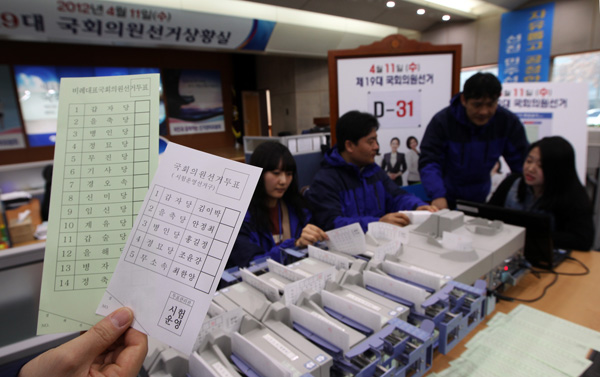 Officials of the National Election Commission check ballot papers and electronic vote-tallying devices yesterday in the situation room for the April 11 legislative elections. Overseas Koreans are allowed to cast ballots for the first time. [YONHAP]


Independence Declaration Day on March 1 was no holiday for Kim Dae-il, a manager of the National Election Commission. He was at his Gwacheon, Geonggi-based office early, staring at a map of the world pinned to the wall.

“The areas needing our election management have expanded all across the world,” Kim said, pointing to the map. “There are many places out there not as stable as Korea, and that means lots of road mines that have to be disabled to get our work done.” 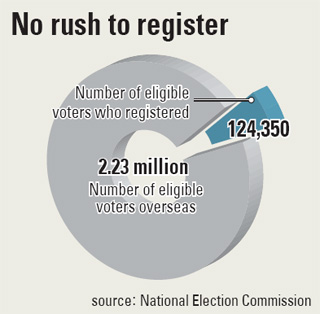 Kim is preparing for the first overseas votes in a Korean election. In June 2007, the Constitutional Court of Korea ruled that Koreans living overseas should not be deprived of their right to vote, and the government revised the election laws. The votes for the April 11 general election will be the first with overseas votes, followed by the presidential election in December.

Korean nationals living permanently or for a short time overseas are eligible to vote, although not Koreans who have taken citizenship in other countries.

In theory, the overseas voters could have a significant impact on any election. Early this year, around 2.2 million people living outside Korea were designated as eligible to cast a vote.

But as the election commission has discovered, the far-flung Koreans aren’t easy to reach, and some live far from Korean embassies or consulates they need to reach to register and vote.

In some countries, it’s too dangerous to make a trip simply to cast a ballot.

Lee Seung-gi, an election commission official assigned to manage the overseas vote in Guatemala, uses a bullet-proof vehicle for his daily commute to the Korean Embassy.

The lack of security is so serious that he witnessed a gunman in a mask fatally shoot the driver of another vehicle last year. According to the NEC, the chief of a local police station was found beheaded in recent years after he launched a crackdown on drug gangs.

And still, 1,052 Koreans poured into Guatemala City, some from far away, to register to vote at the Korean Embassy. Lee wonders how many take the same risks and return to vote. Guatemala not the only dangerous country that Koreans reside in, or even the most dangerous. There are Koreans in Afghanistan, Yemen, Libya and Iraq.

A month has passed since the months-long registration process was finished, and the turnout wasn’t good. Out of the 2.23 million eligible voters, only 124,350, or 5.6 percent, registered during the Nov. 13 to Feb. 11 registration period at 158 foreign diplomatic missions of Korea, according to the National Election Commission. In the U.S., where there are more than 866,000 Koreans eligible to vote, only 23,005 registered.

Overseas voting for the April 11 general elections is slated from March 28 to April 2.

The election watchdog said that the registration rate was not that disappointing, considering it’s the first time for an overseas vote and public awareness was low. They say registration will be higher for the presidential elections, which attract more interest from Koreans abroad than general elections do. In the general election, Koreans abroad can only vote for proportional candidates, not for geographical constituencies.

158 election posts were set up in all Korean missions around the world, including 12 in the U.S.

But many in the Korean diaspora don’t live near an embassy or consulate.

In South Africa, 50 out of 1,000 or so Koreans living in Cape Town registered for the vote on Jan. 28, but that was only possible because Park Si-wan, an NEC official stationed in Pretoria, traveled 1,200 kilometers to Cape Town. That was allowed for the registration, but for the vote itself, each voter will have to travel to Pretoria.

In 67 countries, there are no Korean embassies, like there are in Georgia. According to Lee Gwang-bok, the head of the Korean community in Georgia, none of the 50 Korean nationals in the former Soviet state registered to vote. The nearest Korean foreign mission is in Baku, Azerbaijan, and they would have had to spend around $300 for the visa and flight.

The election watchdog is considering running traveling vote venues, in which election officials travel to distant cities with ballot boxes.

The Ministry of Foreign Affairs and Trade is suggesting mail-in votes, or even voting on the Internet after hearing the views of Koreans overseas. Some Koreans in the U.S. have filed a constitutional appeal against the current system, saying it still infringes on the rights of Koreans living far away from diplomatic posts.

In fact, in the process of streamlining the election law in February 2009, the National Assembly considered allowing voting by mail and on the Internet, but the ruling and opposition parties couldn’t agree because they worried about voting fraud.

“Managing fair elections held in other countries is a daunting job because it is difficult to exercise our legal enforcement,” said an official of the Ministry of Justice.

One worry is that people with foreign passports will try to vote. In as many as 52 countries, it is difficult for Korean authorities to confirm which expat Koreans have naturalized citizenship. “When we inquire to those countries whether they have Koreans with dual nationalities, they don’t let us know,” an NEC official said. “It is impossible to know here whether dual nationals cast a vote in those 52 countries.”

Another possibility is that North Korea could intervene in the election, mobilizing Koreans overseas who ideologically support the North, in particular in Japan and the U.S.

The National Election Commission and the Ministry of Justice said they saw no signs that the Pro-North General Association of Korean Residents in Japan intervened during the registration process for the April 11 general election. Around 60,000 members of the association have Korean nationality and thus are eligible to vote, according to a government official. Some say that worries could resurface ahead of the presidential election in December.

The National Election Commission spent around 8 billion won ($7.2 million) to promote the overseas vote for the general election, and earmarked 21.3 billion won to manage it. That makes the cost for voting per head 230,000 won on the assumption that all of the people who registered will vote.

In some countries, additional costs may be required due to translation needs. Approximately, 95 percent of the Korean nationals in Japan do not understand Korean. “There are requests in Japan that we make ballots in Japanese, but the problem is where will that money come from?” said an NEC official.

In Japan, NEC officials dispatched to the country are working on contingency plans for natural disasters such as the eruption of Mount Fuji. “We need to think of everything that could delay the transportation of the ballot boxes to Korea,” Kim said.

Last month, the government said in a meeting presided over by Prime Minister Kim Hwang-sik that it will actively come up with support measures for the overseas vote, including improving voting infrastructure.

“We have to regard the overseas vote as a cost of maintaining democracy,” said election official Kim.