For fans of the LG Twins, love hurts so bad

For fans of the LG Twins, love hurts so bad 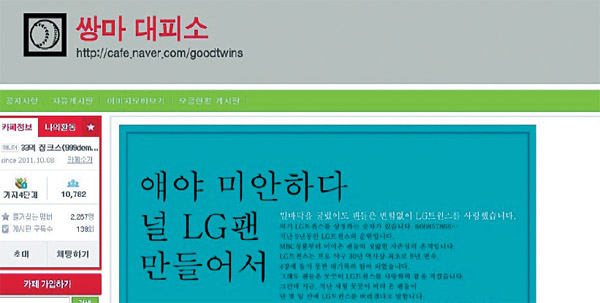 
Pity the long-suffering fans of the Seoul LG Twins. In nine pretty lousy years, the team hasn’t made the league’s playoffs, hasn’t been able to attract quality coaches, and two of its players have been implicated in the league’s worst match-fixing scandal.

But fans continue to root for the team - and publicly decry its disappointments.

After the Korea Baseball Organization suspended two Twins pitchers - 26-year-old ace Park Hyun-jun and Kim Seong-hyun, 23, - last Monday, the bulletin board of the team’s official Web site was filled with messages of anguish and scorn written by fans. The team posted a written apology on the site, but when the fans continued to complain, the team shut down the bulletin board.

But Twins fans, after all they’ve been through, can’t be shut down so easily. About 10,000 of them took their complaints to a Web site called the Shelter for Hurt Twins Fans, and are now demanding team officials develop a better attitude towards fans and their grievances.

“6, 6, 6, 8, 5, 7, 8, 6 and 6 are the rankings the Twins have earned, out of eight teams, in the last nine seasons,” said a devotee surnamed Shin, 28, who created the Web site. “We still love the team despite its amazingly terrible record, but the team doesn’t love us. We’ve seen the Twins give up on communicating with its fans every time they get criticized.”

Shin created the Web site last November when manager Park Jong-hoon was replaced by 42-year-old star player-turned-manager Kim Ki-tae after the team once again failed to reach the playoffs of the 2011 season. When the Twins were scouting for a manager, fans made clear that they favored a high-profile veteran manager such as Kim Sung-keun, who managed SK Wyverns. But the owners hired Kim Ki-tae, the team’s youngest manager ever, in October.

Fans posted angry reactions on the team’s Web site’s bulletin board. The bulletin board was shut down. (It was later restored.) “We don’t have to communicate with those team officials who don’t care about the fans’ feelings,” Shin said.

The dedicated fans even do jobs that should be done by the team. In November, they held a retirement ceremony for legendary pitcher Kim Yong-soo, who retired in 2000 at the age of 42 with a record of 126 wins and 227 saves. They paid out of their own pockets.

Since November, fans have been urging the team to engage with them more often and better. Each member of the Shelter for Hurt Twins Fans Web site has staged a one-man protest rally with messages on a placard at either Jamsil Baseball Stadium, the home of the Twins in Seoul, Guri Baseball Field, the training center for LG’s minor league team, or in Gwanghwamun and Insa-dong in central Seoul.

They’ve also started producing a podcast based on the popular “Naneun Ggomsuda” (“I’m a Petty-minded Creep”) that they’ve named “Neodo Ggomsuji?” (“Aren’t You a Petty-minded Creep, too?”). The podcast criticizes the team for losing players such as the star catcher Cho In-sung and all-star first baseman Lee Taek-geun during the 2011 off season.

“I don’t know why I still love this damn team,” a Twins fan told the JoongAng Ilbo. “I’ve even apologized to my 6-year-old son for making him a Twins fan. But I won’t give up until I see changes and witness them winning the Korean Series.”