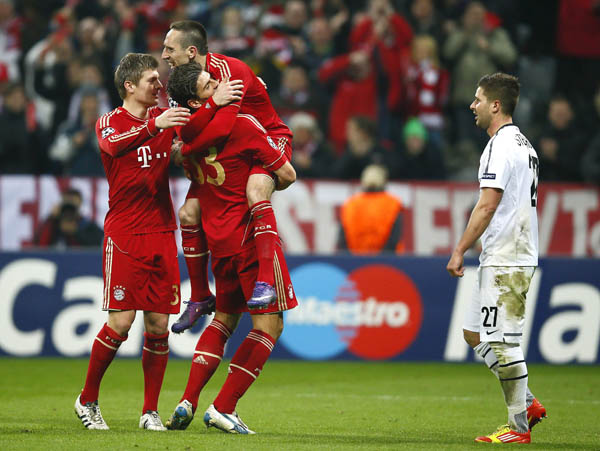 LONDON - A week after Lionel Messi became the first player to score five goals in a Champions League match, Germany striker Mario Gomez came close to equaling the feat Tuesday when he led Bayern Munich on to the quarterfinals.

Gomez instead was the eighth man to hit four goals in a single game, as the four-time European champions demolished FC Basel 7-0 to overturn a 1-0 first-leg deficit and advance 7-1 on aggregate.

“Maybe this will make other teams take notice of us,’’ Bayern winger Arjen Robben said. “Maybe you can say that you don’t want to play Barcelona or Real Madrid, but let’s see what happens.’’

Robben also scored twice for Bayern, which was joined in the next round by Marseille, despite the French club’s 2-1 defeat at Inter Milan.

Inter striker Diego Milito leveled the aggregate score at 1-1 and the second-leg match was heading into extra time before each team scored in injury time to draw 2-2 over two games - taking the visitors through on away goals.

Marseille’s progression on to its first quarterfinal since it won the Champions League in 1993 was down to a standout performance from goalkeeper Steve Mandanda and a stoppage-time goal through substitute Brandao.

Milito canceled out Marseille’s first-leg advantage but Brandao somehow controlled a hopeful punt from Mandanda, which swiveled and scored past goalkeeper Julio Cesar.

“I didn’t see the ball when it bounced off my back,’’ Brandao said. “I just saw it was in my path and stroked it past the goalkeeper.’’

Mandanda was sent off moments later for conceding a penalty that Giampaolo Pazzini converted, but it wasn’t enough for Inter.

Record nine-time champion Real Madrid will look to advance when the quarterfinal lineup is completed Wednesday.

Basel had not lost away from home in its surprise qualification from the group stage, but Robben opened the scoring from a rebound after Mueller had a shot blocked and then provided the assist for his teammate to volley Bayern further ahead in the 42nd.

Gomez took over scoring duties two minutes later with a close-range finish following a corner and made it 4-0 shortly after halftime, scoring at the near post from a cross by Franck Ribery.

Gomez completed his hat trick with a header from another cross by Ribery and grabbed his fourth goal in the 51st from yet another, shooting left-footed into the roof of the net.

Robben rounded off the scoring nine minutes from the end, rounding the goalkeeper to tap in and make Bayern the fourth side after Valencia, Lyon and Barcelona to score seven times in this season’s Champions League.

“Altogether, it was the perfect game from us,’’ Bayern coach Jupp Heynckes said. AP