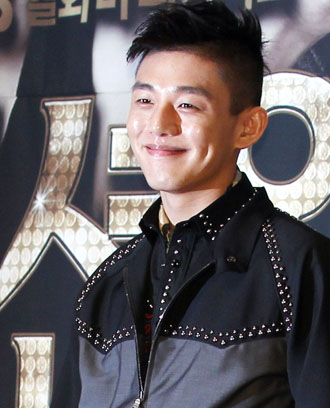 Actor Yoo Ah-in recently appeared at a press conference to promote his new drama “Fashion King,” which hits the airwaves on Monday.
At the event, Yoo talked about how difficult it was to maintain a fashionable appearance for the show.
“I got stressed out about what I should wear. My stylist has been in tears two times because of my demands,” said Yoo.
The new SBS drama centers around a group of ambitious young people trying to make it in the cutthroat fashion industry.
Yoo plays the role of Young-geol, a bold rebel who starts out working at a factory in Dongdaemun, central Seoul, and later relocates to the United States in order to make it there.
“I had to pay a lot of attention to my costumes, as the character that I’m playing lives and breathes fashion,” said Yoo, adding that he felt that playing the fashionable rebel enabled him to show a new side of himself. The actor will also show off his physique in a scene showing off his six-pack.
When asked what he thought about his character Young-geol, the actor said, “He’s rough and a real rogue, but also childlike and cute.”