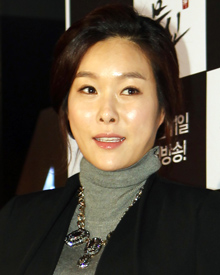 Actress Hyeun, who recently came back from her honeymoon after marrying her boyfriend of one year, has confirmed she is pregnant.
According to the star’s agency on Monday, the actress is in the early stages of her pregnancy.
“Only family members knew about the pregnancy. They are all excited for her, especially her parents,” the agency representative said. “We pray that the public will join us in wishing Hyeun’s new family good health and all the best.”
Hyeun Young walked down the aisle on March 3 at the Sheraton Grande Walkerhill in Seoul. Her husband is in finance and four years her senior.
At a press conference just before the wedding, Hyeun said that the couple would try to conceive as soon as they were wed, saying that they were pressed for time because of their age.
After the wedding, there was speculation that Hyeun was already pregnant. When asked, the agency said that it didn’t know and that it was impossible to find out until the star returned from her honeymoon.