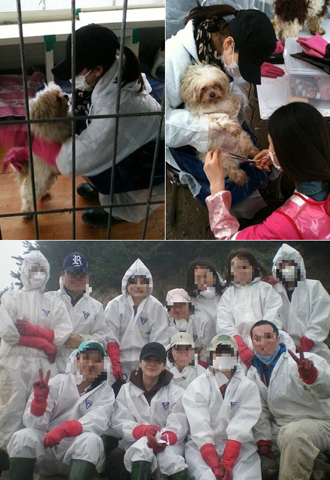 Actress Song Hye-gyo has won praises from netizens when pictures of her helping out at an animal shelter on March 18 surfaced online two days later.

In the various pictures, Song can be seen playing with a dog, holding it while it gets treated as well as being snapped with a group of other volunteers.

Unlike her appearances on TV, Song was dressed down in a jumpsuit and wearing a mask like the other volunteers; she was also free of make-up.

Netizens were quick to comment, “She is even more beautiful on the inside,” “So touching,” and “She’s an angel.”

The animal shelter that Song visited was one located in Cheonan, South Chungcheong.

Meanwhile, Song’s agency told TV Report that Song was an animal lover and had seven dogs at home.

“She didn’t want the press to find out as she wanted to keep up the good work discretely,” said Song’s agency.