Sookmyung president fired in a meeting at airport cafe

Sookmyung president fired in a meeting at airport cafe 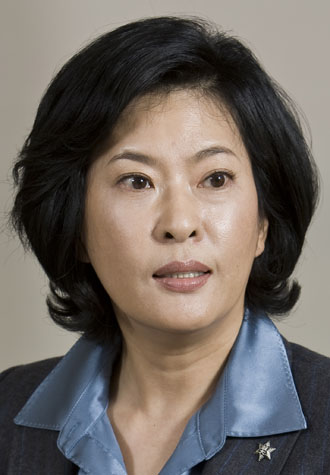 The head of the Sookmyung Women’s University board Lee Yong-tae dismissed Han Young-sil, the school’s president, during an impromptu board meeting at an airport yesterday.

The Ministry of Education, Science and Technology, however, says the dismissal is invalid, as the scandal-ridden Lee is posed to lose his authority by the end of the month.

Last week, Lee was stripped of his authority because of an internal dispute over outside donations to the school. According to ministry officials, Sookmyung Women’s University received a total of 68.5 billion won ($60 million) in outside donations for 15 years between 1995 and 2009.

Sookmyung Hagwon, which oversees the university, transferred the donation funds to its bank account and then returned it to the school, disguising the donation money as regularly-obtained funding.

Besides Lee, the Education Ministry also revoked the authority of five other board members involved in the misappropriation of donations.

The Education Ministry revoked the authority of the Sookmyung Hagwon to govern the university.

Lee held an emergency board meeting yesterday at 7 a.m. in a coffee shop in Gimpo Airport in Seoul. This was to include a board member who had just returned to Seoul to meet quorum.

At this meeting, six of the eight Sookmyung Hagwon board members in attendance unanimously voted to dismiss President Han for “constant criticism and attacks against the board for the past three years” and “continuous pressure for board members to retire.” Two-thirds of the board members, or six members, had to vote in order to remove Han.

The Sookmyung Hagwon, founded in 1912, runs the prestigious Sookmyung Women’s University as well as Sookmyung Middle and High Schools.

In attendance at the board meeting were the dismissed principals of Sookmyung Girls’ Middle School and High School.

But the Education Ministry replied that “the dismissal decision did not follow legitimate procedures, [so] the board’s decision is invalid.”

The ministry further expressed that dismissing the university’s president had not been presented as an item on the agenda of the board meeting beforehand, and for an emergency item to be voted upon, all members of the board had to be present.

Likewise, Han’s supporters voiced that the decision was “illegitimate” and demanded a regular board meeting.

Lee held a press conference yesterday afternoon and explained through an anecdote his decision to dismiss Han: “If a branch manager is told to report back to the superior but doesn’t, in the president’s perspective, it’s only natural to dismiss [the manager].”

Meanwhile, regarding misappropriating school donations and his dismissal as head of the Sookmyung board by the Education Ministry, he said, “I only borrowed a little bit from the school accounts and to be told to quit my position is like a death sentence.”

He also stated it is unfair that all the blame for laundering was shouldered by the board members and that “former university president Lee Kyung-sook has not been questioned.”

But the Education Ministry responded that the university “has already been issued a warning” and that the head of the board naturally bears responsibility for “not properly supervising” the auditing process of the school. Sookmyung Women’s University also decried the board’s decision and Lee Ki-bum, its dean of academic affairs, stated yesterday, “The items of the board need to be announced seven days in advance, but dismissal of the [university] president was only announced this morning.”

The final ruling on Lee and the five board members’ authority will be held on March 30.