Rain performs to commemorate the 46 soldiers killed in Cheonan sinking

Rain performs to commemorate the 46 soldiers killed in Cheonan sinking 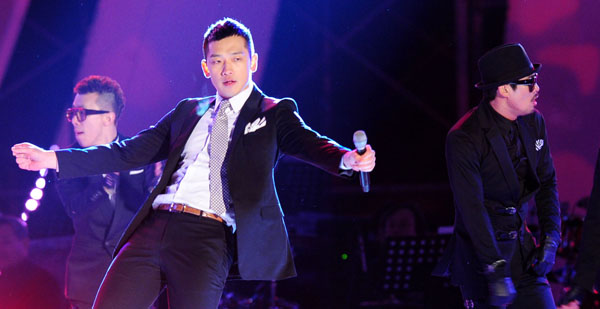 
Rain, who is currently fulfilling his military service at the Defense Agency for Public Information Services, performed at the “2012 Seoul Peace Music Festival” on Monday to mark the second anniversary of the sinking of the Cheonan warship.

The event took place at the War Memorial of Korea in central Seoul to honor the 46 South Korean soldiers who perished when North Korea fired a torpedo at the warship on March 26, 2010, near Baengnyeong Island.

The occasion marked the first national performance by Rain since he joined the Army’s public relations division, often dubbed the “celebrities’ division.”

Rain showed off his trademark powerful dance moves, proving that he still has the skills that brought him to fame even after being away from the stage.

Park Hyo-shin, Maya and Insooni also performed during the event.

The festival will air on KBS 1TV’s weekly program “Open Concert” on Sunday.