Summit spouses get a taste of Korea

Summit spouses get a taste of Korea 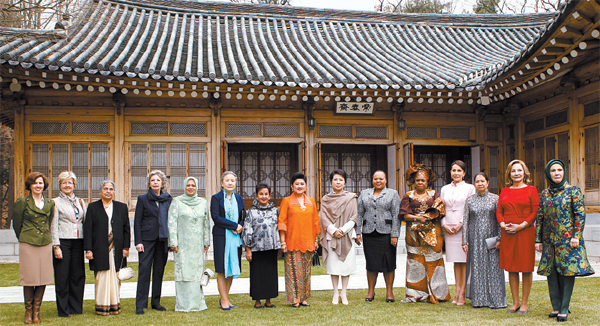 The first lady, Kim Yoon-ok, (seventh from right) and 14 other spouses of global leaders, including those from Italy, India and Nigeria attending the 2012 Nuclear Security Summit, take a commemorative photo at the Blue House yesterday. Kim hosted a series of Korean cultural events, a luncheon and a K-pop performance. By Kim Kyung-bin


On the second day of the 2012 Nuclear Security Summit, spouses of the global leaders attending the summit experienced a series of Korean cultural performances that included Hallyu, or Korean Wave.

Kim Yoon-ok, the first lady of Korea, yesterday hosted a series of Korean cultural performances including a Korean dish luncheon and K-pop performances at the Blue House.

The attendees hailed from Gabon, Nigeria, South Africa, Malaysia, Vietnam, Switzerland, Singapore, India, Indonesia, Italy, Chile, the Philippines, the United Nations and the European Union, according to the preparatory secretariat. The Turkish and Chinese first ladies were also invited but did not show up for unknown reasons.

At the luncheon, Kim served a series of Korean traditional meals such as kimchi jeon (kimchi pancake), japchae (glass noodles mixed with vegetables), hangwa (traditional Korean dessert), Korean traditional tea and shinseonro (traditional hot pot) with a “Spring of Korea” theme. The organizers said they brought fresh organic ingredients from all over the country in order to serve the highest quality Korean foods.

After the luncheon, cultural performances followed. The group watched the “Queen’s Morning”, a hanbok (traditional Korean wear) performance, which showed a Korean queen in a traditional ceremony. Famous Korean ballerina Kim Joo-won performed it and incorporated a variety of hanbok costumes.

Followed by the hanbok performance, the guest also sampled another piece of Hallyu with popular K-pop boy band JYJ. The group sang “In Heaven” and “Be My Girl,” and young ballad singer Sung Si-kyung sang “Kissing a Fool” at the guest house of the Blue House.

On Monday, the spouses also visited the National Museum of Korea in Yongsan District in central Seoul, to view several cultural artifacts from the Joseon Dynasty period and also participate in a concert performed by young Korean classic musicians such as 18-year-old pianist Cho Seong-jin, who took third place in last year’s Tchaikovsky International Piano Concert and 25-year-old violinist Kim Soo-yeon, who won the Hanover International Violin Concert in 2006.

As a souvenir, the attending leaders received a Samsung Galaxy Tab with their names engraved on the back.