ZE:A’s Kwang-hee proudly admits to having his entire face ‘retouched’

ZE:A’s Kwang-hee proudly admits to having his entire face ‘retouched’ 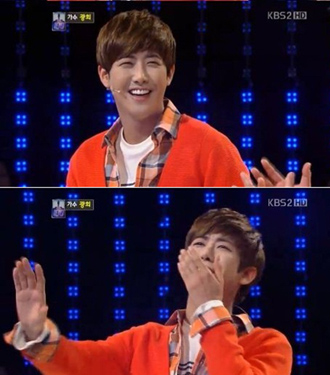 Kwang-hee of the boy band ZE:A has admitted to having gone under the knife for extensive plastic surgery and said he would get more, but can’t because of his fame.

“Basically, everything you can see on my face has been retouched. I had my nose done, work done on my forehead, and oh, my eyes, too,” said the 23-year-old star of the rising boy group on an episode of KBS 2TV’s “1 vs. 100” on Tuesday.

“I thought that my eyes needed to be subtle in relations to other features. Wouldn’t it have been too much if my eyes looked super enhanced? I’m a man who knows moderation,” joked the idol singer.

In a candid manner, Kwang-hee spoke to the host of the show about the taboo topic that many other celebrities simply try to avoid. When asked if he wanted to retouch his face further, he said he simply couldn’t.

“Of course I could think of problem areas. But firstly, I don’t have the time. Secondly, everyone would be able to tell. It’s about time I stopped with surgery.”