Athletes’ story of friendship retold in ‘As One’

Athletes’ story of friendship retold in ‘As One’ 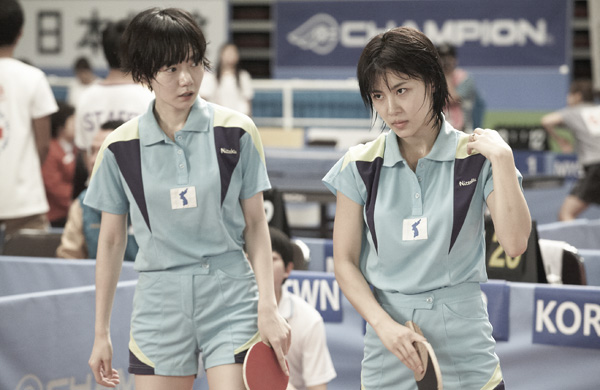 Bae Doo-na, left, and Ha Ji-won play the North and South Korean table tennis players who went on to win a gold medal during the World Table Tennis Championships held in Chiba, Japan, in 1991, in the film “As One.” Provided by CJ Entertainment


One might wonder why there has never been a movie about the dramatic 1991 World Table Tennis Championships, in which the first unified Korean national table tennis team won the gold medal.

Hyun Jung-hwa, the South Korean athlete who played on the team at the championships, certainly did. 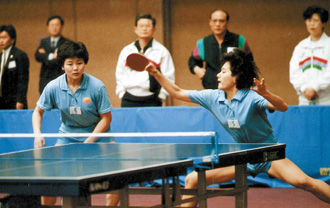 “When the director approached me about the idea for a film about the championships in 1991, I said to him, ‘Why didn’t you approach me sooner?,’” the Olympic gold medalist said at a press conference for the film “As One” on Wednesday.

The film is based on the true story of the United Korea team, made up of North and South Korean players, which competed in the women’s team tournament at the Chiba World Table Tennis Championships in 1991 and won. As such, the filming process relied heavily on Hyun, who was involved in everything from the screenwriting process to teaching table tennis to the actors.

Hyun said that she focused on trying to make the film as honest and true to reality as possible.

“Lee Boon-hee [the unified team’s North Korean player] is left-handed. People on set said to Bae Doo-na [who plays Lee in the film], ‘Oh, only a few people know she is left-handed, so just play with your right hand.’ But I firmly said no,” said Hyun.

Although Bae said that she had some experience playing table tennis in elementary school, she confessed that the rigorous preproduction training took a toll on her.

“After a few months of training with coach Hyun Jung-hwa, toe nails fell off!,” she said during the press conference, adding that trying to keep up with the athletic Ha Ji-won [who plays Hyun Jung-hwa in the film] was what motivated her to push herself further.

Ha, who was seated next to Bae, admitted her weakness for choosing physically challenging roles such as the one in “As One.”

“When we started training, I was still suffering from a knee injury that I got while filming ‘Sector 7’ [last year’s 3-D blockbuster],” said the actress.

“I like a challenge. However, the real challenge in this film was trying to recreate a true story in a convincing way. During the training, I tried to observe coach Hyun’s speech and body language very carefully.”

First-time director Moon Hyun-sung said he felt it was crucial that his own voice as a director didn’t outshine the drama of the real story.

“Instead of trying to put too much of my own voice as a director into the film, I thought it would be good if the audience felt the story unfold very naturally, as if they were watching a real-life melodrama,” said Moon.

The director said he also took extra precautions to ensure that the North Korean dialects in the film were as realistic as possible, with different actors getting coached on different dialects.

One of the more touching moments in the film takes place towards the end, when Hyun gives Lee a ring as a token of friendship as Lee sits on the bus that is headed back to North Korea.

In reality, the table tennis legend said that she gave the ring, complete with an engraving of Hyun and Lee’s names inside, to Lee on the last day of their stay in Japan.

“I told her that I wanted her to remember me,” said Hyun. She added that after the 1991 tournament, she saw Lee one last time in 1993, as a competitor representing North Korea. “I still feel very emotional when I think of her.”

Stars Bae Doo-na and Ha Ji-won said that they felt it was refreshing to play strong women in the film, without a leading male by their side.

“It is so rare in films nowadays for actresses to be able to tell a story about women in films, with a cast full of other actresses,” said Bae.

“Even though the film touches upon themes of a divided Korea through a sports tournament, it is ultimately about the friendship and love between two women.”

“As One” is slated to open in local theaters early next month.