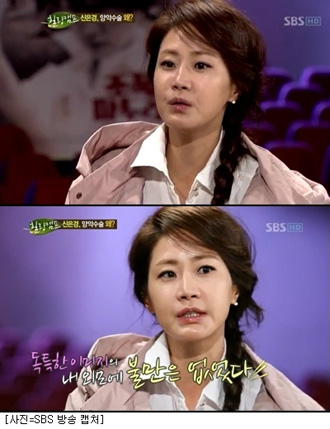 Actress Shin Eun-kyung appeared on the talk show “Healing Camp” on SBS and spoke against bimaxillary osteotomy surgery, which she had previously undergone.

On the show that aired on April 9, the actress spoke candidly about the controversy that erupted when it was revealed in August of last year that she had received the operation for a slimmer jawline.

“It’s a serious surgery, one which you can die from. If you were going to be paid to undertake it, you would have to demand a lot of money,” said Shin, whose agency claimed back in August last year that the star underwent surgery to improve her chances of landing feminine roles.

Shin said that the public should be warned about the pain and danger associated with surgery.
“You shouldn’t consider it an option for pure cosmetic purposes. It’s a procedure where they cut off parts of your jaw. Then for 3-4 weeks, you can’t eat, your mouth is tied shut with metal wire and your nose is taped tight too,” Shin said.

The 39-year old actress said she would never be able to go through pain like that ever again.
The actress thought the public should be warned as many surgeons are marketing the procedure as a no-fuss alternative to looking good, often with references to successful celebrity cases.