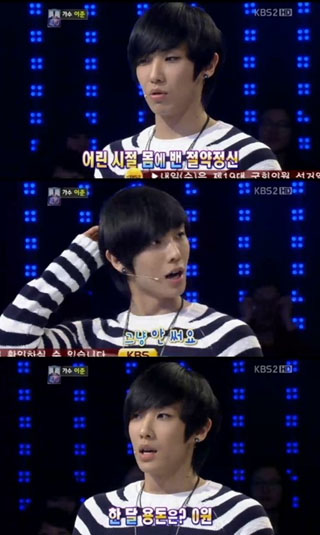 Lee Jun from boy band MBlaq shocked fans and TV viewers alike when he revealed his extreme thriftiness during a TV appearance on Tuesday, saying he doesn’t spend any money.

Lee said that his monthly expenses are a grand total of zero won on an episode of KBS 2TV’s “1 versus 100.”

“From a young age, I’ve learned from my parents about the importance of saving and spending wisely. By saving every penny, I was able to purchase my house,” said the boy band member, who is best known for his stylish impression onstage.

“I don’t enjoy spending money, and to be honest, the agency feeds me, clothes me and drives me around, and if I’m thirsty during rehearsals, I drink from the water dispenser at the studio,” the 24-year-old said.

“The free food at the studio does get a little old sometimes, though.

“It used to be kimchi fried rice everyday, but now it’s beef-fried rice. At least kimchi wasn’t so heavy, but beef for breakfast everyday is too much. Please, feed us a variety of food,” Lee said for laughs.