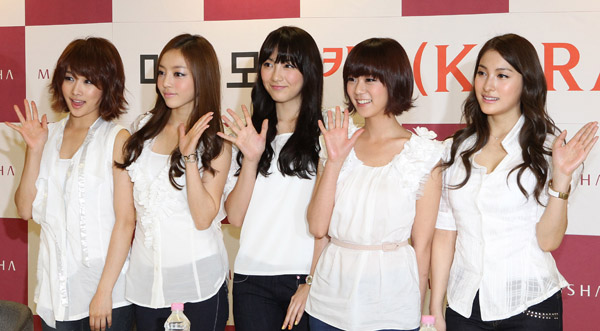 
Korean girl group KARA’s hit song “Mr.” from 2009 is still the No. 1 song to sing at Japanese karaoke, according to Fuji TV.

On a program entitled, “Hey Hey Hey” on April 9, the song was voted as the best song to sing at karaoke post-1990s.

KARA usurped popular Japanese girl band AKB48 to reach the coveted spot.
“Mr.” was an instant hit in Korea and Japan upon being released, due to its catchy hook and hypnotic choreography focused on the swinging of the pelvic region.

Last year, Japan’s leading karaoke enterprise also picked the hit song as No. 2 most sung tune at karaoke venues. Girls’ Generation came in at third on the same ranking.

A triumph in karaoke songs’ ranking testifies just how popular the band is, as tunes are picked on how widely-known they are and their simplicity of lyrics and melody.

Just days before, KARA was picked to be the face of a new soya-based snack in Japan and also announced that it would launch its own fragrance from mid-April. Meanwhile, from mid-April, the girl group is set to tour Japan, China, Hong Kong and Thailand as part of its Asian tour.